Seeing Eagle River today, it's difficult to imagine how such a small town was home to not just one, but two early breweries. Established in 1843, Eagle River was a port town through which nearby copper mines received supplies and exported their copper (1,5). A long pier jutted into Lake Superior, and freight was transported between ships and a warehouse with hand cars on a rail track (1). Only a few pilings, mostly below the water line, remain today. 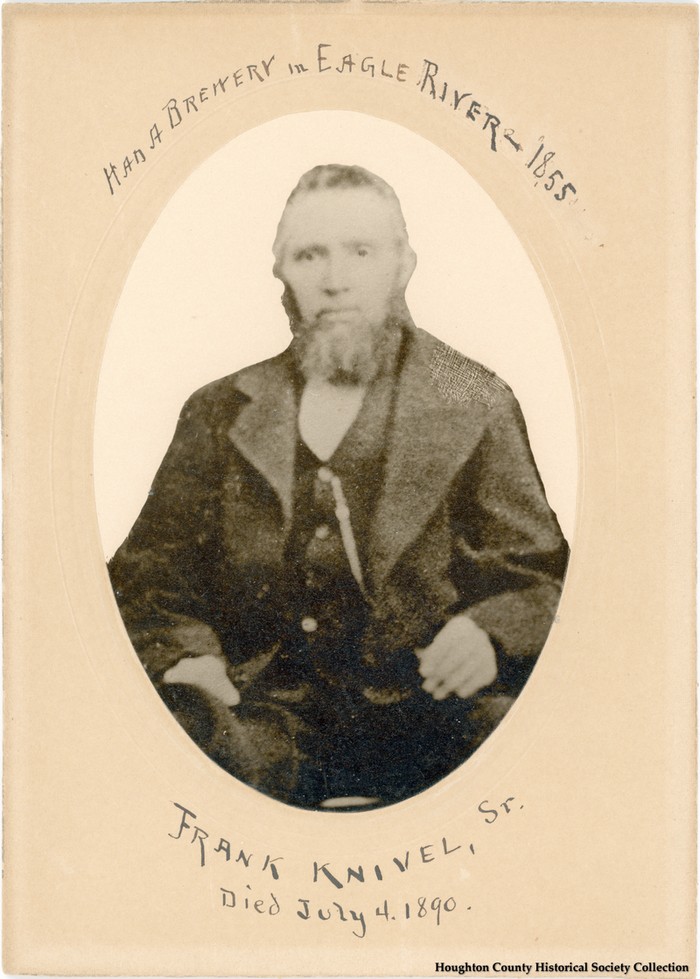 Frank Knivel was born in Prussia on 25 May 1822 (9) and immigrated to the Copper Country in 1850, where he spent four years working for the mines (1). In 1854, he moved to Eagle River and constructed a brewery, which started operating in 1855 (1). An early map (10) shows the Knivel property located on the south end of Elm St., which matches Monette's (5) description of its location relative to the river bend. It consisted of three buildings, one had three stories and a full basement, another housed huge wooden vats, and the third was undescribed by Monette (5).

The Eagle River Brewery appears to have been the first brewery in the Copper Country, and one of the first in the Upper Peninsula of Michigan (6). It was the only brewery in Keweenaw Country that used bottles with signature embossing. Foley & Smith from Eagle Harbor used embossed bottles, but they were strictly bottlers, not brewers. The second brewery in Eagle River, the Joseph Clemens brewery, burned down in June 1867 when fire destroyed almost the entire business section of town (8). It was listed in the Michigan State directories in 1863 (19) and 1867 (20), but not in 1873 (21), suggesting that it was not rebuilt after the fire and thus was gone before lager beer started to be bottled in the late 1870s. 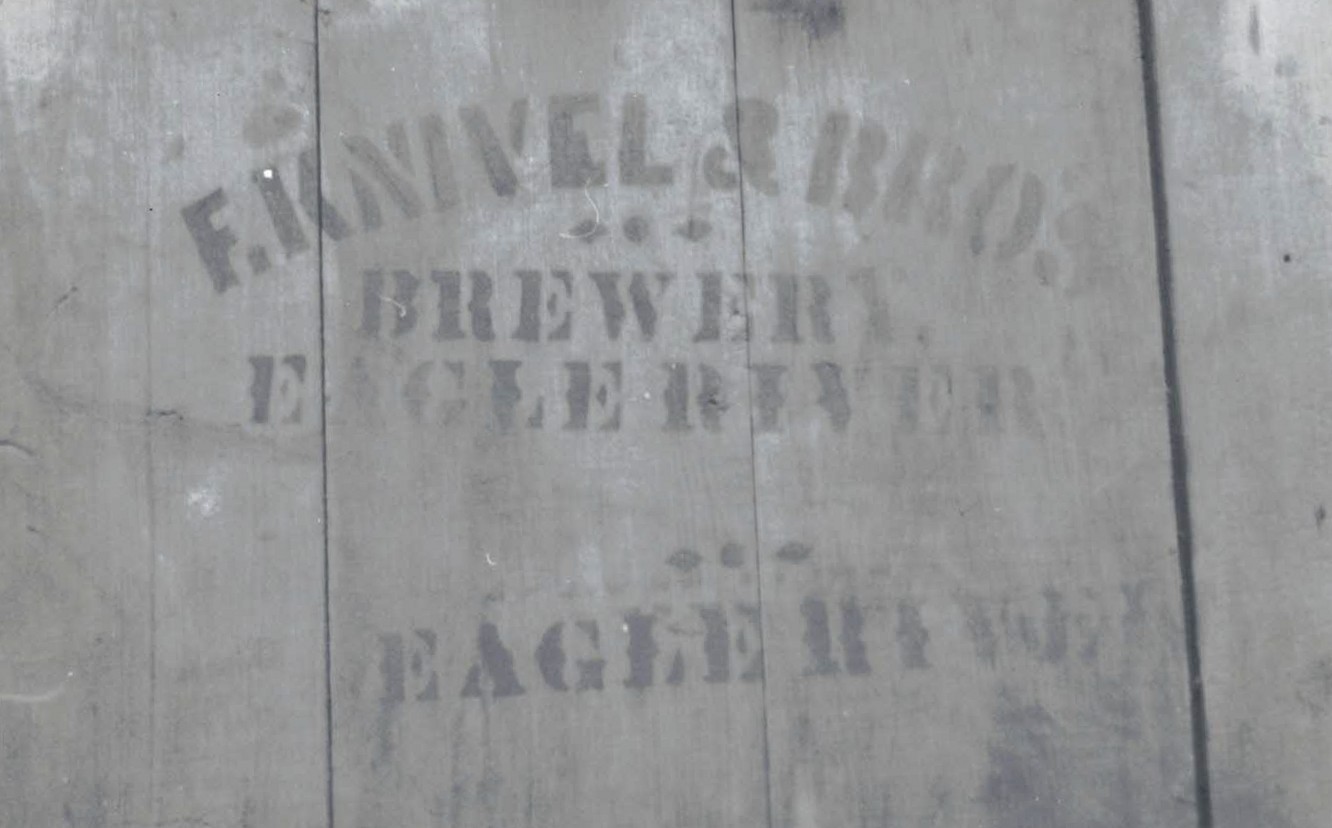 Today we are left with nine bottles from Eagle River Brewery. All feature a lightning stopper top and date mainly or exclusively to the 1880s. The embossing specify four partnerships:

Curiously, all four partnerships had one bottle made by Chase Valley Glass Co. No. 2, which dates to 1880-1881 (14). Why such partnership changes in such a short time period? The 1856 directory listed Knivel Brothers (with name misspelled) as brewers, and specified them as Francis and Antony (2). This listing indicates that Frank's brother was involved early in the brewery's operation, possibly from its start. The 1879 directory listed them as Frank and Anton (3). The 1880 U.S. Federal Census recorded Anton residing in Frank's household (11). This early partnership places the two F. KNIVEL & BRO. bottles as the first two bottles.

Anton died on 23 Jun 1881 at the age of 62 in Keweenaw County (24), and was buried in the Roman Catholic cemetery at Cliff (27). Anton's death might explain why Frank then took on his sons as partners. Perhaps Frank ordered the F. KNIVEL bottle during a brief transition between partnerships, especially when his sons were only 19 and 22 at the time of Anton's death. It is also interesting to note that #101 and #104 have the same misspelling of "Knivel", suggesting that these bottles may have been produced sequentially. Census records (11) show that Frank A. Knivel Jr. and John Knivel were Frank's two sons, both born in Michigan, as referenced on the two bottles embossed with F. KNIVEL & SONS. The last set of bottles bears F. KNIVEL JR AGT or FRANK KNIVEL JR AGT. The last two bottles of this set, #107 and #107a, (technically variants with the same plate) bear the maker's marks of C & Co. and C & CO LIM. Cunninghams & Co. involved a limited partnership from c.1886 (7). Thus, these two bottles were the last bottles used. Despite the name changes on the bottles, the Michigan State directories continued to list Knivel Bros (22) or F. Knivel & Bro. as the brewers (23), although the same firm name could refer to Frank Jr. and John.

We could not find direct historical evidence of when the brewery closed. Van Wieren (15) dated the closing of the Eagle River Brewery to 1888. When Frank's wife, Sophia, died on 23 Aug 1884 (17), she was buried in the Roman Catholic cemetery at Cliff (27), suggesting that the family was still in Eagle River at that time. At some point, however, the family, except for Frank Jr, moved to Detroit (28). The 1887 Michigan State directory listed F. Knivel & Bro. as brewers in Eagle River (23), and then the 1888 and 1889 Detroit City directories listed Frank Sr. and John as residents of Detroit (12,13). Frank's will and probate record (on ancestry.com) indicated that he was an inhabitant of Detroit at the time of his death on 04 Jul 1890. It also stated that John resided in Detroit and Frank Jr. resided in Eagle River. Frank Sr. was buried in Mount Elliott Cemetery in Detroit (9). In Oct 1890, the remains of Anton and Sophia were disinterred and transported to Detroit, where they were buried alongside Frank Sr. (27) at Mount Elliott Cemetery (17,18). The notice of Frank's death, however, stated that the brewery was in operation until about four years ago when they moved to Detroit (28), which dates the closing to 1886. Curiously though, the 1889 directory listed F. Knivel as a brewer in Eagle River (29). Did Frank Jr. run the brewery alone after the family left, or did the brewery close at that point? Frank Jr's obituary stated, "When a young man, Mr. Knivel worked as a brewer in the establishment conducted by his father at Eagle River and later he conducted the business" (16). Magnaghi (6) stated that the brewery closed in 1910, which matches the date Van Wieren (15) gave for the closing of the Eagle River Brewing Co. We are unfamiliar with this company, and its name and start date of 1899 may have originated as a transcription error with Calumet Brewing Co. in a 1997 Daily Mining Gazette article. Whenever it closed, the chief cause was a lack of shipping facilities given no railroad connected Keweenaw County (33).

Another mystery lies in the embossing of the later bottles: F. KNIVEL JR AGT or FRANK KNIVEL JR AGT. In what way, was Frank Jr. an agent for the brewery? If he did run the brewery alone, either before or after his family moved, he should have been manager or proprietor, not agent. Alternatively, he could have owned the bottling operation and bottled the brewery's beer as an agent. In Jun 1889, he was proprietor of the bottling works in Eagle River and agent for Jos. Bosch & Co. (30), so the bottling works endured after the closing of the brewery. He sold beer by the glass or bottle (30), and in Aug 1889, he purchased a new beer wagon (31). He then sold the bottling works to Foley & Smith in May 1890, who moved it to Eagle Harbor (32). The brewery, on the contrary, was part of Frank Sr's estate when he died on 04 Jul 1890, according to the will and probate record.

In Oct 1890, John visited friends and relatives in Eagle River and apparently looked over the property of the Knivel estate (34). It was reported that the brewery could be leased or purchased (34). Despite calls to support local business in Eagle River by re-opening the brewery (35,36,38), it became a thing of the past (37).

The Knivel bottles rank among the most esteemed beer bottles of the Copper Country. They represent the pioneer mining region of the Keweenaw Peninsula distant from the larger cities of Calumet/Laurium and Houghton/Hancock. The copper mines in this region had their heydays in the mid-1800s and closed prior to 1900. Since the publication of Old Copper Country Bottles, diggers have found a few more specimens of these bottles, especially #102, and the first intact example of #104. They all remain highly desirable and anyone should feel very fortunate to have a Knivel bottle in their collection.

Follow the history of Frank Jr. and John Knivel on the Red Jacket Bottling Works page.

color: medium amber
maker's mark: C & CO LIM (base)
other marks: THIS BOTTLE NOT TO BE SOLD (back)
rarity: extremely rare