The Twin City Bottling Works was one of the prominent soda/mineral water bottlers in the Calumet/Laurium area. The bottles show a succession of three proprietors: Chas. Klein, Mrs. C. Klein, and Louis Decker. They also show earlier names for the bottling works under Chas. Klein.

Charles Klein was born in 1852 (1) in Russia (2). Because he had such a common name, we cannot be sure when he immigrated to the U.S. nor when he settled in the Copper Country. His earliest listing in the Polk directory was for a saloon in Red Jacket in the 1889 volume (25), and he had the same listing in the 1891 volume (3). It was announced in May 1892 that he would be opening a pop factory in Calumet Village, and he secured the services of Jos. Wolf of Milwaukee who had 30 years of experience in the business (26). He hoped that by providing a superior product he could receive at least a share of the patronage, and he felt there was room for a second pop factory in the county (26). There were, however, three competitors at this time: Matt Northey in Houghton, C. J. Sorsen in Red Jacket, and Jos. James in Red Jacket. By 12 days later, he was in full operation, and his delivery wagon made its first appearance in Lake Linden (27). In Jul 1892, we find the use of the name, Calumet Village Bottling Works (28). Since bottle #106 is also embossed with CALUMET VILLAGE BOTTLING WORKS, we can place it as his first bottle. In Oct 1892, he was agent for Barrett & Barrett's famous York State cider and was prepared to supply it in barrels or bottles (29).

The bottles embossed CHAS. KLEIN BOTTLING WORKS presumably followed. The 1893 directory listed Charles Klein as a bottler in Calumet, but it did not specify a business name. Despite the directory listing and these bottles specifying Calumet as the location, his bottling works was actually in Laurium. Laurium was previously called Calumet Village and Calumet was previously called the village of Red Jacket (30). The town name of Laurium was not established until 1895 (30), and we first see it used in the 1895 Houghton County Polk directory (4).

Charles Klein and Jos. James were the two prominent bottlers in the Calumet/Laurium area, and competition was apparently fierce. In Nov 1893, it was announced that Jos. James' employee, James Ford, was charged with stealing bottles belonging to Charles Klein, but he was acquitted by a jury (31,32). James then filed complaints against Klein but they were dismissed by juries (33).

The 1895 directory listed the name, Twin City Bottling Works as manufacturers of carbonated drinks, and located it at the southeast corner of 3rd St. and Kearsarge St. in Laurium (4). It specified Charles Klein as proprietor with residence at the same address. The twin cities were Calumet and Laurium. The 1897 directory noted that he had a branch in Hancock (7), but it is unknown where it was located or if he bottled there. Since this was its only listing, the Hancock branch was probably short-lived. It is interesting to note that his bottles embossed with TWIN CITY BOTTLING WORKS do not specify a town name, which could then be distributed from either town. In 1898, he constructed a railroad about 75 ft long to transport cases of bottles from the wash room to the bottling works (21). 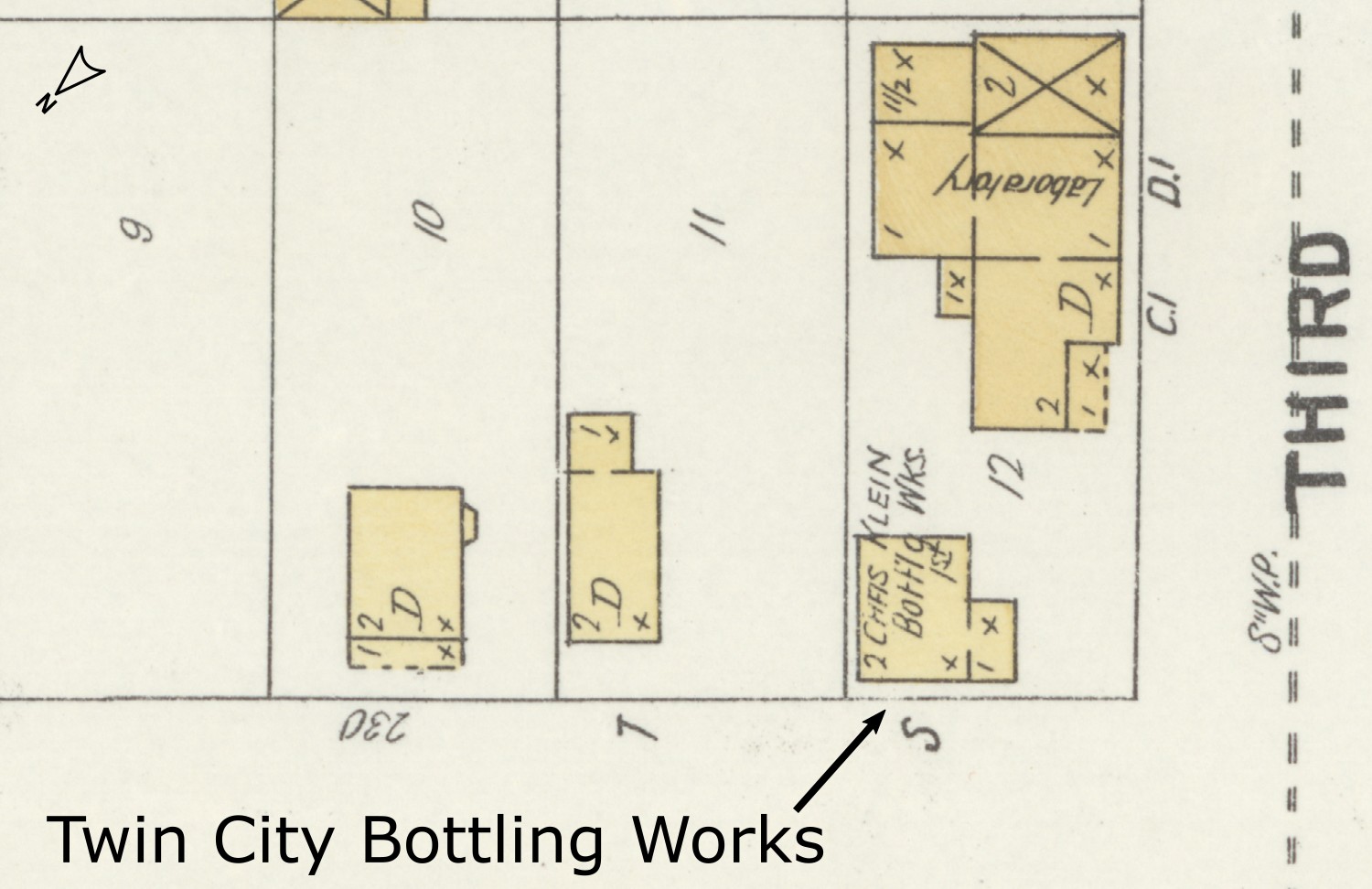 Charles Klein dealt in more than just pop and mineral water. He was listed as agent of the Detroit Safe and Lock Company in 1895 (4). In 1897, he was advertised as agent for the liquid carbonic acid beer pump used to keep beer in barrels or kegs fresh once tapped (5,6). He was also general agent in the U.P. for the Quaker Bath Cabinet which claimed to prolong life (7). Unfortunately, he suffered from ill health, and as a result, offered his pop shop for sale in Feb 1899 (34). He visited Chicago to seek medical attention in Apr 1899 (35) and returned with Otto H. Zimmerling, who was put in charge of managing the pop business (36). Despite seeking medical attention in Detroit (37) and Denver (38), he died on 10 Feb 1900 (1) from pulmonary tuberculosis at the age of 47 (2) and was buried in Lake View Cemetery, Calumet (1).

The most notable bottle Chas. Klein used was the brilliant cobalt blue Hutchinson bottle (#107). The 1903 and 1906 Illinois Glass Co. catalogs indicate that this was not a standard glass color for soda bottles and thus would have required a special order, probably at a higher price. It is the only cobalt blue bottle from the Copper Country; and even across the nation, cobalt blue Hutchinson bottles are rare. So why would he order such a bottle? Was it to celebrate the beginning of the 20th century? Was it to highlight a special drink he manufactured? Or did Mrs. C. Klein order it to memorialize her late husband? 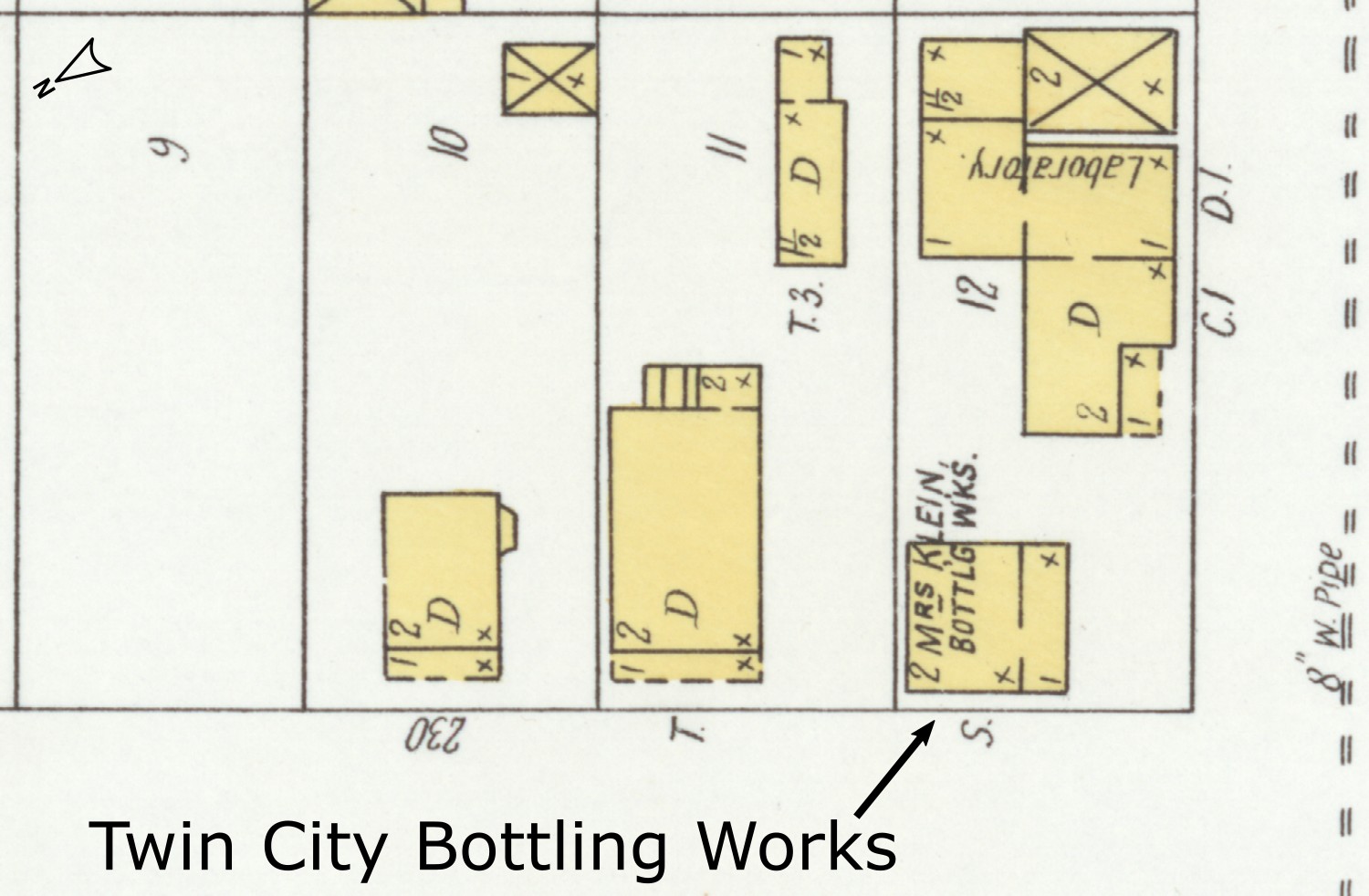 Louis Decker was the next proprietor of the Twin City Bottling Works. He was born in Aug 1874 in Germany and immigrated to the U.S. in 1890 (9). He and his newly-wedded wife, Gertrude, resided in Ironwood, MI during the 1900 U.S. Federal Census (9). It seems they moved to Minnesota next, because their two children were born there (10). He was then listed as a bartender in Laurium in the 1905 directory (14). He evidently became proprietor of the bottling works in 1905, since a sales receipt, dated 06 Jul 1905, stated his name. The 1907 directory then listed Louis Decker as proprietor of Twin City Bottling Works (15). We also see the corresponding bottles bearing his name. Decker apparently purchased the business but not the facilities, since the bottling works moved to 204 Hecla St., Laurium while Caroline Klein continued to reside at 246 3rd St. (15). 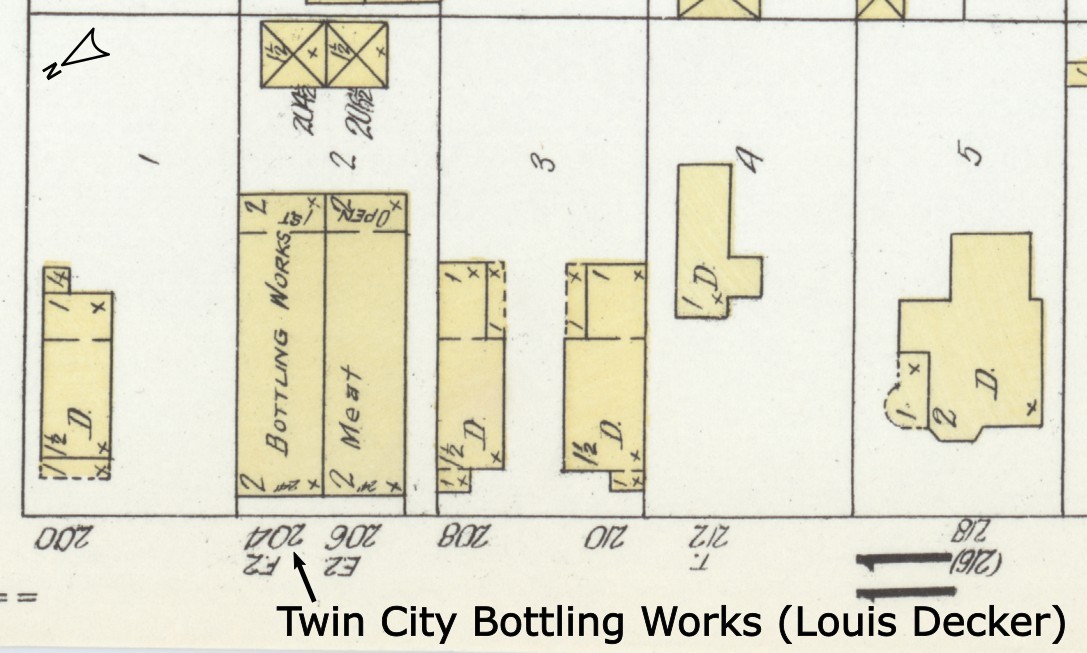 Caroline Klein did not list an occupation on the 1910 U.S. Federal Census, but her daughter, Carrie took up dressmaking (10). In 1912, she filed a petition to the court for herself or some other suitable person to be made administrator of Charles' estate (20). She died on 23 Feb 1929 at the age of 76 (2) and was buried with Charles at Lake View Cemetery, Calumet (16).

As for Decker, he sold the bottling works to the Upper Peninsula Bottling Co. in May 1908, and the plan was for him to operate the plant for the new corporation (24). However, he was still listed as proprietor of the Twin City Bottling Works in the 1909 directory (17) and then not listed in the 1910 directory (18). Decker moved to Eveleth, MN by the 1910 U.S. Federal Census and was a manufacturer of soda water (10). Interestingly, he continued to bottle as the Minnesota Hutchbook lists a bottle embossed, UNION BOTTLING WORKS / LOUIS DECKER / EVELETH, MINN. (19).

capacity: half-pint
color: colorless to amethyst
top: Hutchinson top - tooled
maker's mark: (none)
other marks: THIS BOTTLE NOT TO BE SOLD (lower back), CK monogram (base)
date: 1900-1905
rarity: rare

maker's mark: (none)
other marks: CK monogram (base)
rarity: rare