Let us tell you about the Copper Country. A vein of copper runs under the Keweenaw Peninsula and southward to Ontonagon. This deposit is unusual in that it contains metallic copper that is nearly 100% pure. In contrast, almost all other copper deposits around the world contain copper compounds. Native Americans mined this ore by digging small pits and fracturing the rock with fire and water. Michigan became a state in 1837 and Douglass Houghton, the state geologist, reported the deposits in 1841. Exploratory operations began in the 1840s, and the first successful mine, Cliff mine, began operations in 1845. Native copper ore was extracted by shaft mining. In these early years, people and supplies arrived by boat on Lake Superior as there were no roads connecting this remote region to the rest of the state. The early Cliff Mine in Keweenaw County and Minesota Mine in Ontonagon County became legendary as large producers of copper. 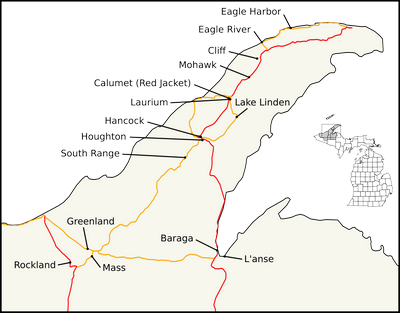 A massive copper mining industry developed in the subsequent decades. It established the infrastructure needed to be totally self-sufficient in this remote and secluded area. This industry attracted laborers, miners, tradesmen, merchants, and the like to support the mines and the towns that sprouted around them, including port towns on the Keweenaw Waterway and Lake Superior. It was indeed a melting pot of different peoples and cultures who sought a better life for themselves and their families.

Copper production peaked in the first decade of 1900 with most of the production coming from the Calumet and Hecla (C & H) Mining Company of Calumet and the Quincy Mining Company of Hancock. C & H had some 15,000 workers in various aspects of the company’s operations. Calumet Township in 1910 was home to 32,845 people out of 88,098 in the entire county of Houghton. In contrast, in 2010, Calumet Township had about 6,489 with about 37,361 living in the county.

The copper mining industry is long gone, but hardly forgotten. Most of the mines closed by the 1960s with White Pine Mine operating until 1995. The Keweenaw National Historical Park, established in 1992, and many support groups and preservationists endeavor to preserve the historical sites and artifacts tied to the history and heritage of the Copper Country. They tell enduring stories of life set in this rugged yet beautiful land surrounded by the mystical waters of Lake Superior.

Bottle Collecting in the Copper Country

As a collector of Copper Country bottles for the last 50 years, I’ve had much time to reflect on this somewhat unusual hobby that has been part of my life for so many years. My next birthday will be my 80th and I’m looking forward to seeing Copper Country bottles finally take their rightful place as important historical artifacts representing the history and heritage of the Copper Country. This website will reveal that our old bottles have stories to tell. 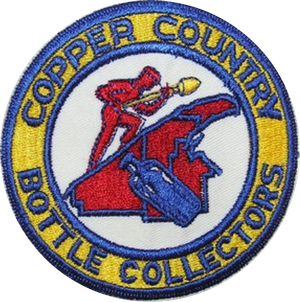 Bottle collecting in the Copper Country started to become a hobby in the late 1960s. By the early 1970’s, it was evident that bottle diggers and collectors needed to be able to identify the local bottles they were accumulating. Much was already being done at the time to identify bottles that were nationally distributed, but virtually nothing was known about our local bottles.

Fellow collectors felt the same as I did so in 1973, we organized a bottle club, The Copper Country Bottle Collectors. We held monthly meetings, elected officers, hosted special events such as club digs, invited speakers knowledgeable in old bottles, and sponsored and co-sponsored bottle shows and other events. The club sought to learn about old bottles by consulting sources such as the Old Bottle Magazine and the Federation of Historical Bottle Clubs. After three years, much was learned about bottles in general, but much was left to be learned about the local bottles of the Copper Country.

In 1976, the club undertook a project to write a book that would catalog the Copper Country bottles and jugs known to exist. For over two years, we spent many hours using various sources to identify our bottles as best we could. It was a monumental effort, but it culminated in the publication of our bottle book in 1978. It soon became the bible for local collectors.

A fellow collector along with our wives joined forces and bought an old streetcar station building in Calumet that served as the main transfer station from 1902 to 1932, and then as a neighborhood grocery store until we bought it in 1978. We wanted to be able to sell bottles that weren’t local and use the money to buy the local bottles we needed to set up a museum so we could share our hobby with the public and other collectors. We did that then and over the years assembled a museum collection that today displays a near complete collection of the known local Copper Country bottles.

Meanwhile, the book would go on to attract future collectors and perpetuate the hobby. The book was so popular that it was republished in 1992. Original copies of the first publication are as rare today as many of the bottles featured in the book. In any event, the club served its purpose, and as the years went by, it became more of a social function with fewer members as older people passed on and younger people left the area for college or work. The club disbanded in about 1988.

Today many of the original club members are deceased but few are still avid collectors. My eldest son Bret has been collecting our local bottles as long as I have and continues to find some of those elusive bottles along with my good friend Jason Oyadomari. Many new bottles have been discovered since 1978 and they need to be cataloged for other collectors. Instead of a new edition of the bottle book, Jason has created this website as the next phase of Copper Country bottle collecting. It can facilitate continuous updating as new bottles or variants are discovered and more historical information is researched. Our hope is that others will be able to see what can be done to document the old bottles and their histories of a local area.