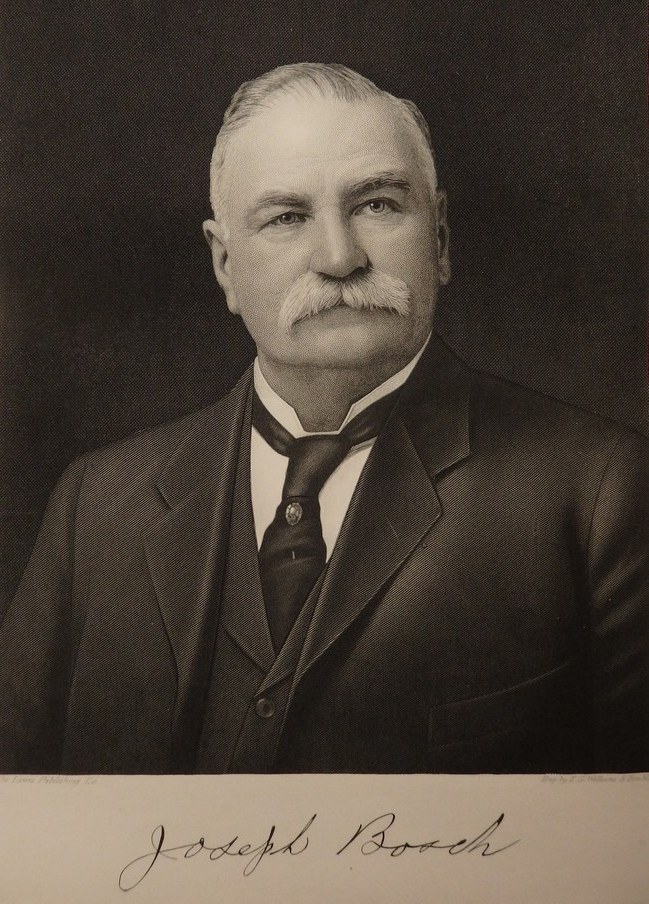 Perhaps the most celebrated name in Copper Country brewing history is that of Joseph Bosch. Born into a family well adept at the art of good beer making, Joseph carried on the family trade by learning the brewing business under his father. He accumulated additional knowledge and experience on his own, which eventually led him to establish a small brewery in Lake Linden in 1874 (1,2). This small enterprise would grow to produce preferred varieties of beer recognized throughout the Upper Peninsula for 99 years. This record will remain as a lasting tribute to Joseph Bosch and to all those people associated with the Bosch Brewing Company.

Joseph Bosch was born in Baden, Germany on 11 Feb 1850 and immigrated to New York in 1854 with his family at the age of four (2,5). In 1862, when he was 12 years old, they moved to Port Washington, Wisconsin where he worked under his father in the brewing industry (2,5). In 1867, they moved to Torch Lake (5), where Joseph erected the first house in Lake Linden and worked at the Calumet & Hecla stamp mill for four years (2,3). To gain better knowledge of the brewing business, he moved to Milwaukee, WI to work at Schlitz Brewery, and then to Cleveland, OH and Louisville, KY (2). He returned to Lake Linden in 1874 and established his brewery (2).

Bosch operated the brewery on his own for the first two years (1,2), and produced 1,717 barrels of beer in his first year (1). In 1876, he partnered with Joseph Wertin & Sons of Hancock (3) and called the firm Joseph Bosch & Co. (2). This partnership may have stemmed from Bosch being married to Joseph Wertin's daughter, Mary, in 1875 (2,3). The firm of Wertin & Sons operated a general store in Calumet (8) and then a second store in Hancock (9). In 1877, the brewery produced and sold 2,124 barrels of beer (15). By 1883, they were producing 4,000 barrels per year, one-fourth of which was bottled (3). Bottling started in 1877-1878, as indicated by the bottles, following the advent of pasteurization. The bottles during this partnership bear the name, TORCH LAKE BREWERY. The firm name was specified on the bottles as J. BOSCH & CO., JOS. BOSCH & CO., or JOSEPH BOSCH & CO. 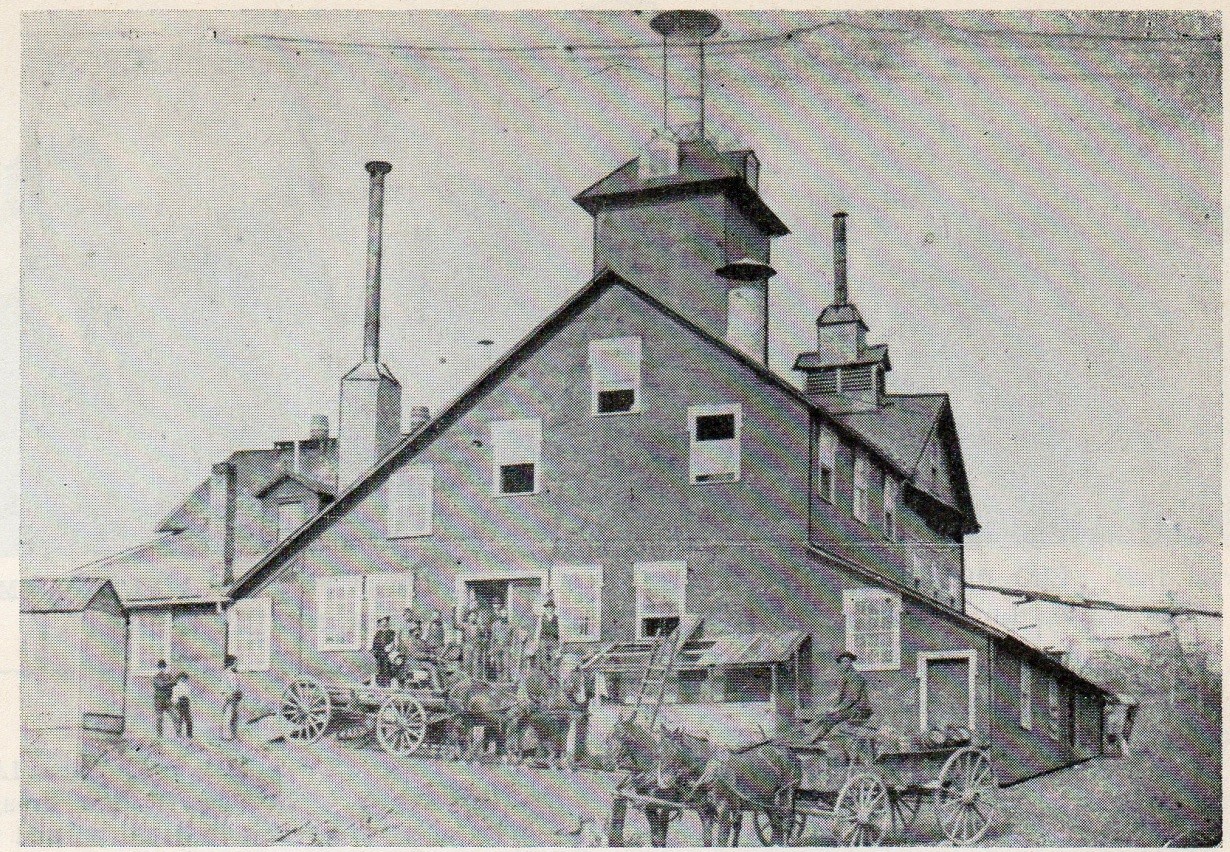 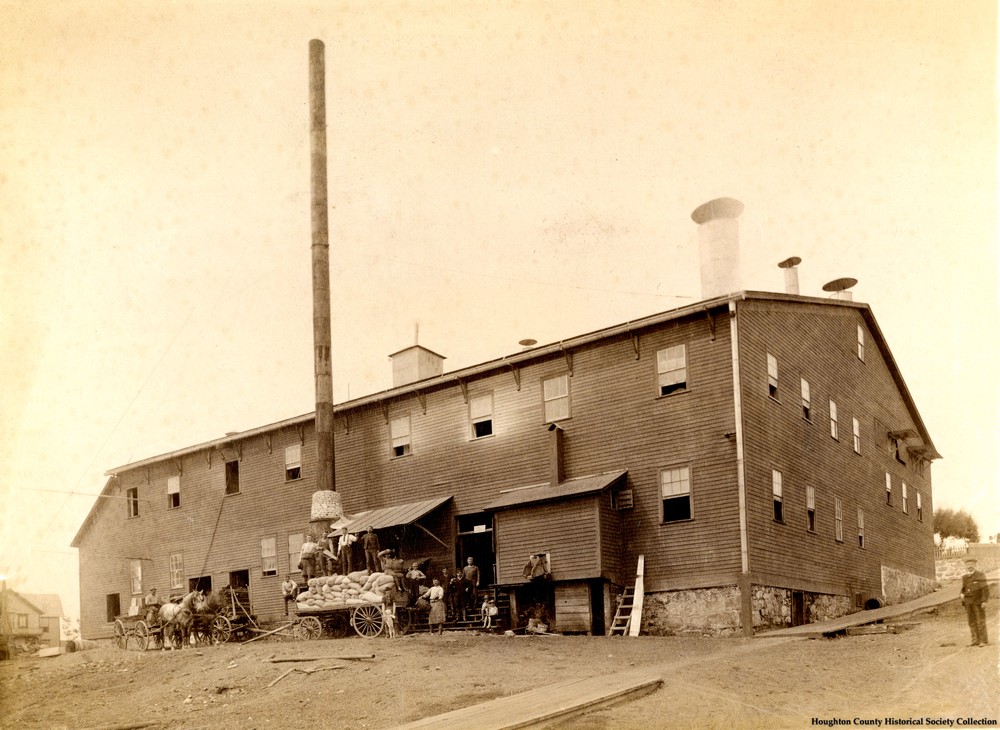 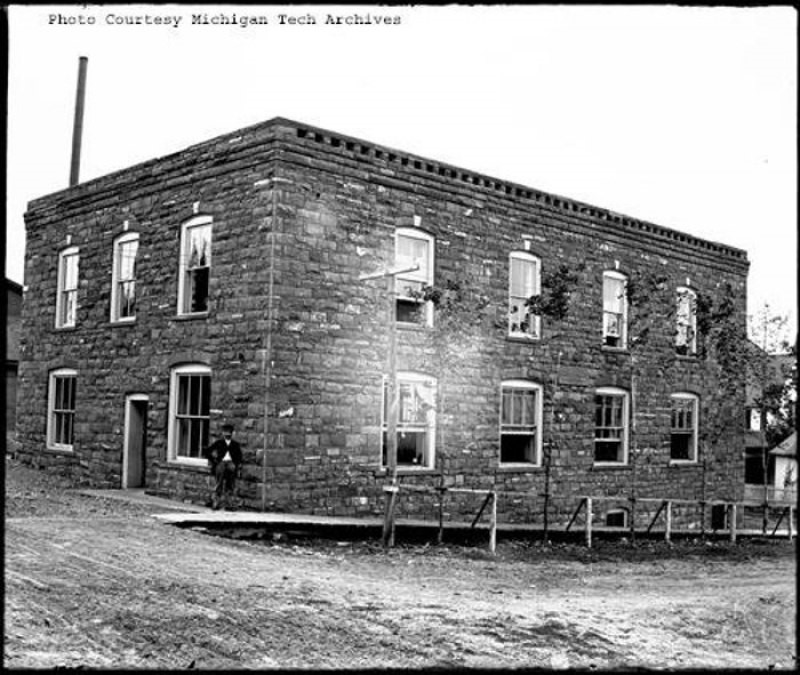 In 1886, the plant was enlarged to meet the growing demand (1). A 790-ft deep artesian well was bored and its water, claimed to treat kidney, liver, and stomach troubles, was used in brewing (1). On 20 May 1887, fire destroyed nearly all of Lake Linden including every building belonging to the firm (1), but the artesian well was saved (27). The fire started in Neumann & Trelease's store (28). The brewery was rebuilt and started selling beer again by Oct 1887 (1). In 1889, the brewery's production ranked 11th within the state of Michigan (29). The Sanborn map places the brewery on the southeast corner of Center St. and Schoolcraft St. 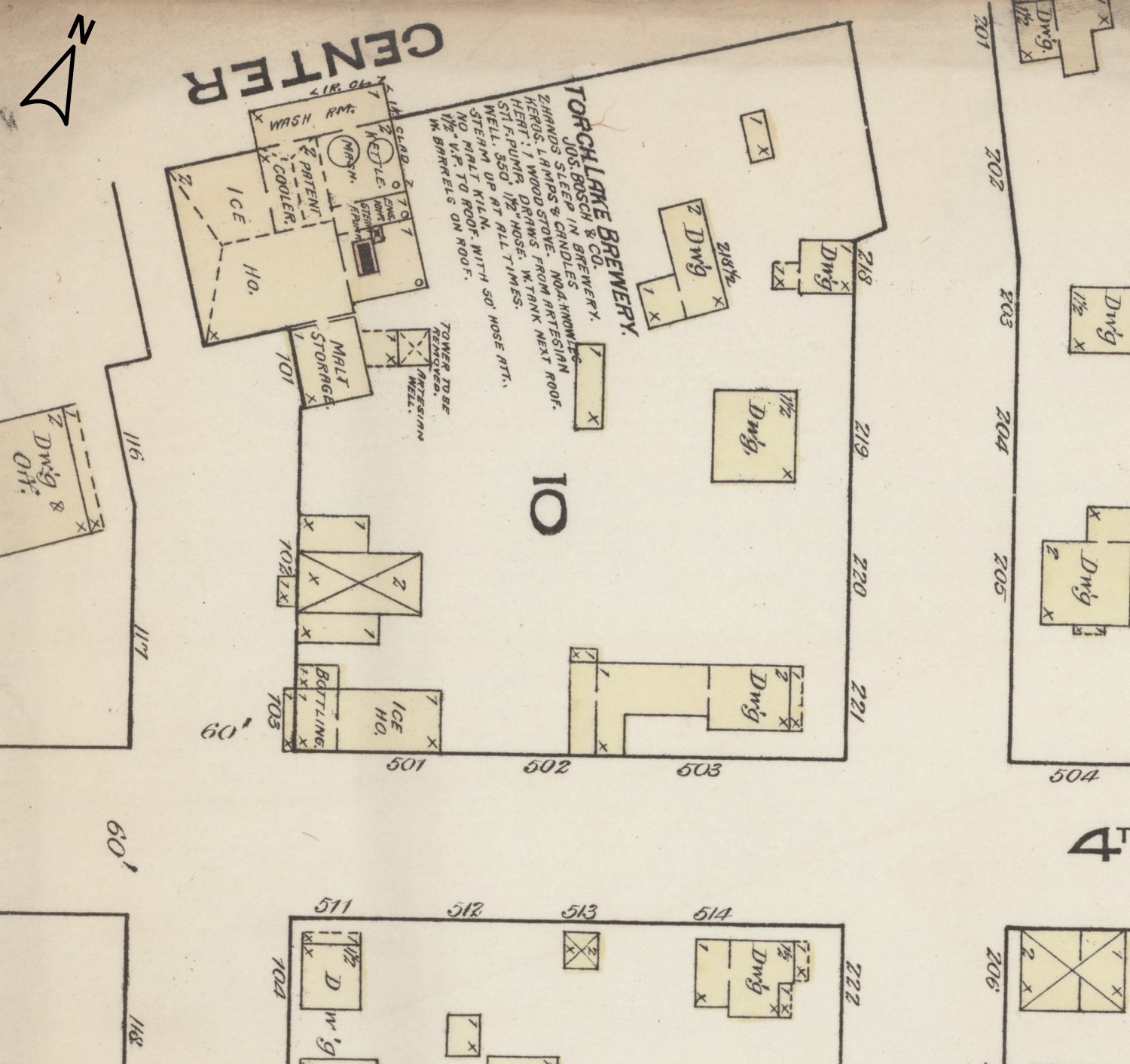 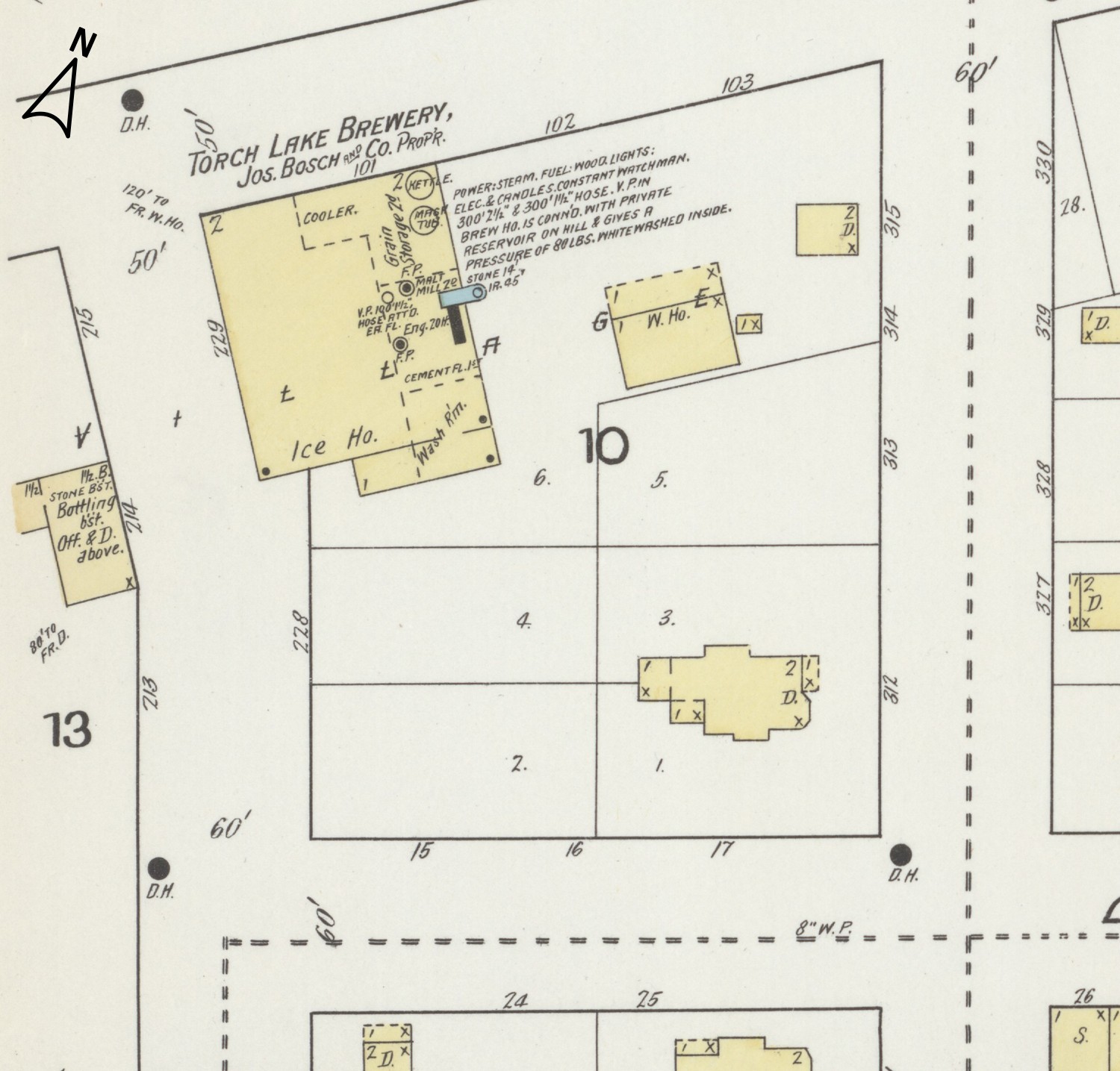 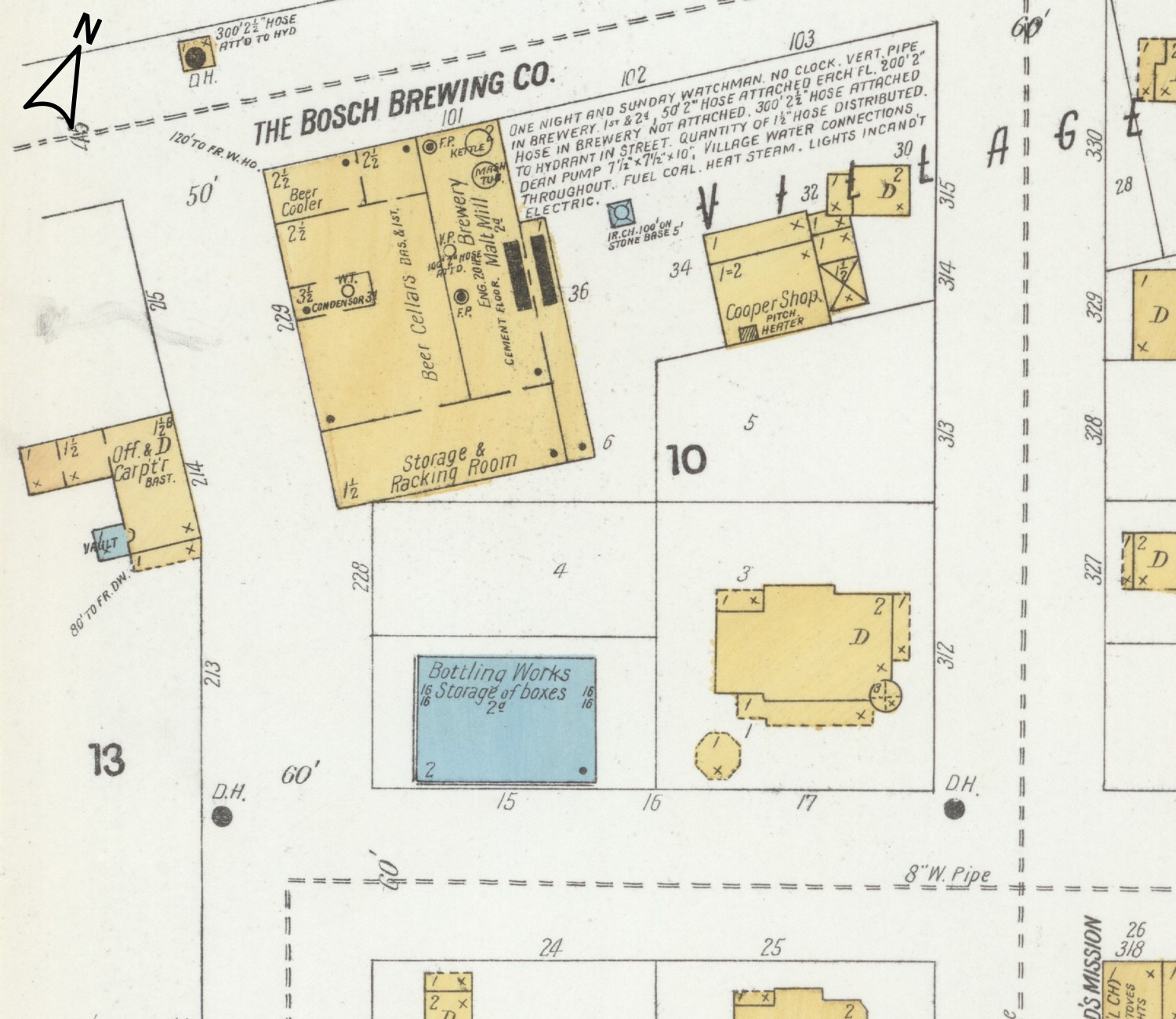 In May 1891, Bosch had plans to wire the brewery, bottling works, and office for electric lights (18). In 1892, the brewery expanded with new kettles and mash tubs, and a refrigerator that maintained the desired temperature for fermentation and storage, thus eliminating the need for ice (1). The improvements doubled the storage capacity of the brewery (22). In Aug 1896, a new bottling works was near completion (30). It was constructed of Portage Lake sandstone and the floor was caulked and waterproof (30). It was equipped with a patent bottle cleaning machine with a capacity of 3,000 bottles per hour and a steam corker or sealer (30). This building is shown on the 1900 Sanborn map.

In Nov 1892, the company claimed that a few competitors imitated their labels sufficiently enough to deceive some customers into believing they were purchasing Torch Lake beer (23). In late Nov 1892, they announced that all their bottles now bear a trademark, as shown in the advertisement (24).

George Wertin died in 1890 (7) and Joseph Wertin Sr. died in 1893 (1), and Bosch purchased his interest and that of Joseph Wertin Jr. (2). On 01 Mar 1894, Bosch formed a stock company, the Bosch Brewing Co., for which he maintained controlling interest and served as president (1,2,5,26). We see this change reflected on the bottles now being embossed, BOSCH BREWING CO. / LAKE LINDEN, MICH.

Jos. Bosch & Co. released Bavarian beer in Jan-Feb 1892 (19), and then about a month later, changed its name to Ulmer to distinguish it from the Bavarian beers of other breweries (16,20). The company released Export beer in Feb-Mar 1892 as a low-alcohol beer brewed from only malt and hops (21), and Bock beer in Apr-May 1892 made from selected malt and imported hops (17).

The company pamphlet descibed the three types of beer produced by 1899 (1):

"Superior Stock", a beer second to none, is brewed from the choicest imported hops and malt especially manufactured for this Company. The "Ulmer" is a rich, dark and heavy beer, brewed after the Bavarian process. The "Export" is a mild, light beer, but highly nutritious.

The company stated that bottling was the most substantial aspect that extended its reach (1). Superior Stock and Ulmer were sold in kegs and bottles, while Export was only sold in bottles (1). In Jun 1893, the company announced that Superior Stock can now be found in pint bottles, with a 24-bottle case selling for $1.25 (25). By 1899, the company bottled 1,063,452 bottles and thousands of kegs of its number one beer, Superior Stock (1). The company had branches and storehouses in Hancock, Calumet, Ishpeming, Eagle Harbor, and Baraga (1). In the late 1890s, the embossing on the bottles changed to the script Bosch design. In Dec 1899, the company launched Gilt Edge and marketed it clear white bottles (recognized as aqua glass today). More beer varieties soon followed. In 1902, annual production was about 20,000 barrels (10).

Aside from brewing, Joseph Bosch was a prominent member of the community. He helped to organize the First National Bank of Lake Linden in 1888 and then became its president (2). He became a partner in a general merchandise store in Lake Linden, which was purchased from D. W. Sutter in 1885 (5). He served as mayor of Lake Linden for four years (5). He was known to have a charitable disposition: giving his time freely to worthy enterprises, extending a helping hand to the needy (2), and contributing to the development of Lake Linden and neighboring towns (5). 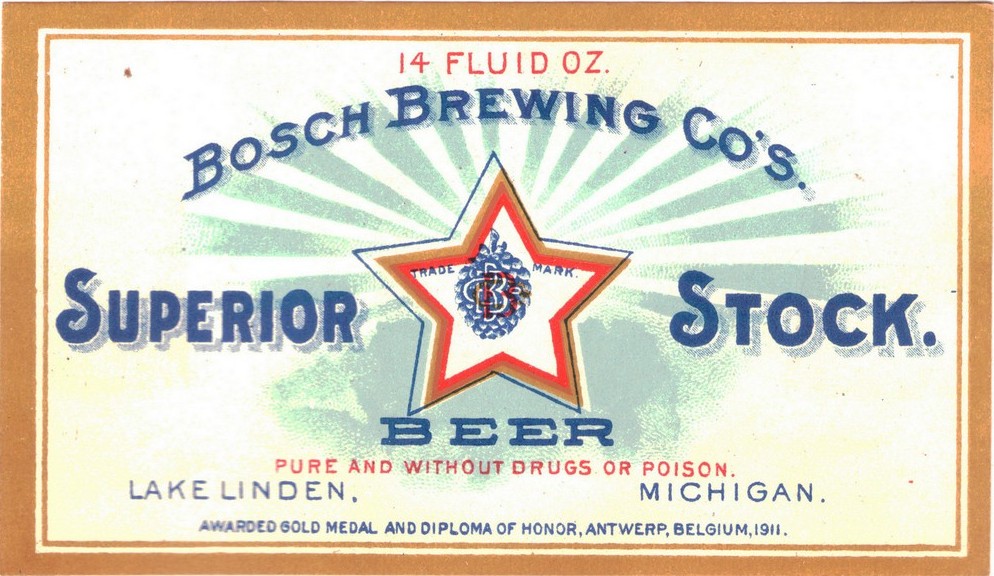 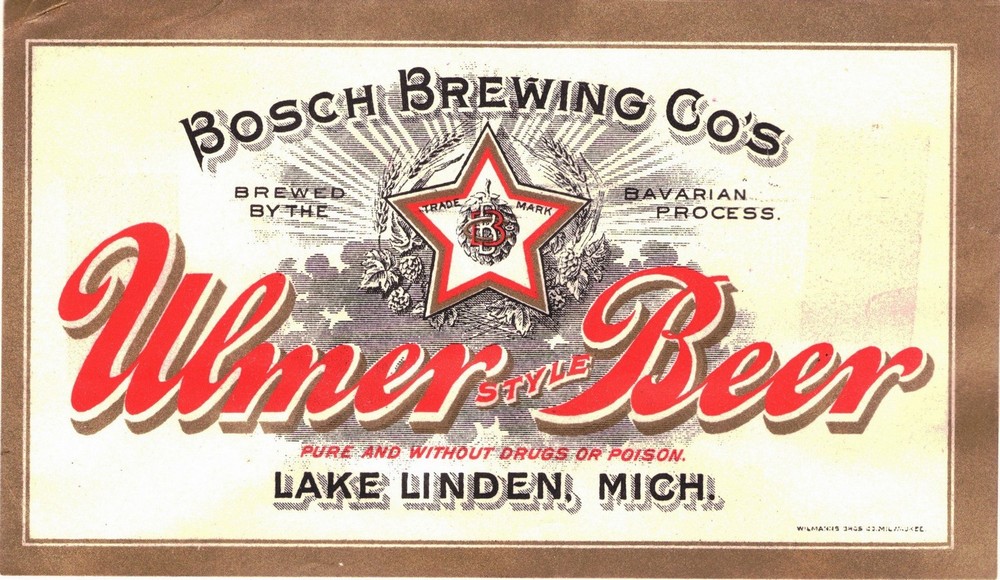 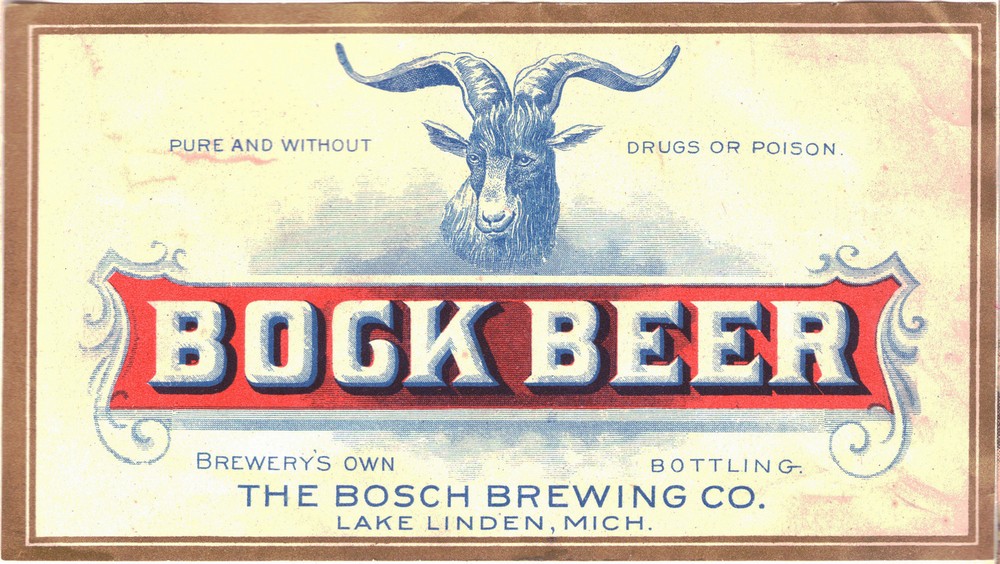 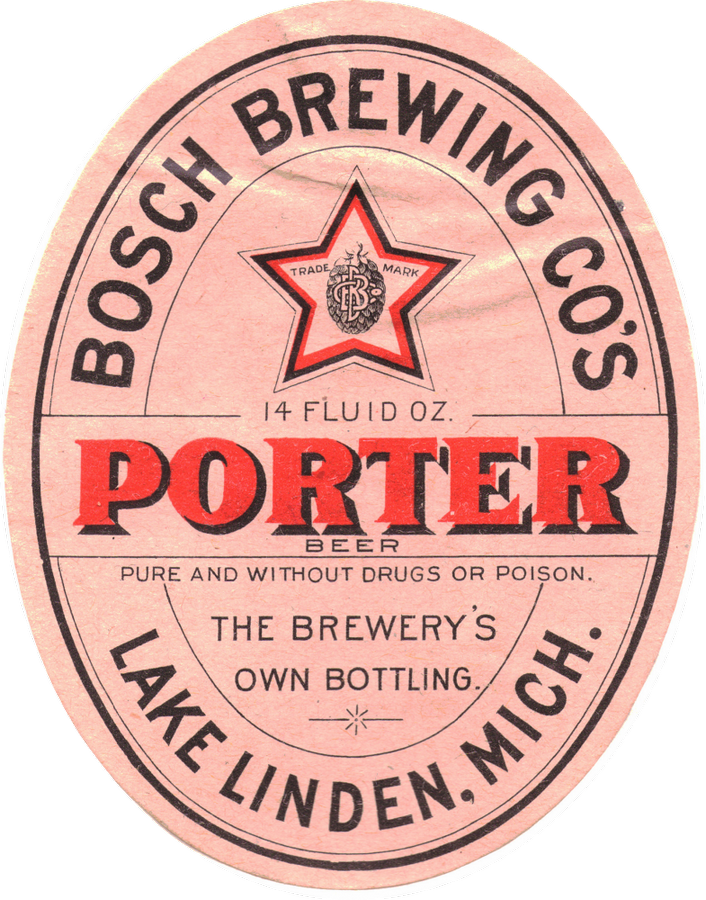 capacity: quart
color: aqua top: lightning stopper - applied
maker's mark: C & I (base)
other marks: THIS BOTTLE NOT TO BE SOLD (back)
date: 1877-1878
rarity: extremely rare

capacity: quart
color: amber
top: lightning stopper - applied
maker's mark: (none)
other marks: THIS BOTTLE IS NOT TO BE SOLD (back)
date: late 1880s
rarity: rare

maker's mark: (none)
other marks: THIS BOTTLE NOT TO BE SOLD (back)
rarity: rare

maker's mark: (none)
other marks: THIS BOTTLE NOT TO BE SOLD (base)
rarity: common

maker's mark: N B B G CO (back heel)
other marks: (none)
rarity: common

maker's mark: (none)
other marks: (none)
rarity: common

capacity: pint
color: amber
top: crown top - tooled
maker's mark: A B Co. (?)
other marks: REGISTERED (under plate), THIS BOTTLE IS NOT TO BE SOLD (base)
date: 1912
rarity: common