J. A. Cochran curiously had bottles from Baraga and from Houghton. As it turns out, he started in Baraga and then moved to Houghton to expand his business.

John A. Cochran was born in Feb 1869 in Michigan to immigrants from Canada (4). It is unknown where in Michigan he was born or when he arrived in the Copper Country, but he lived in Marquette during the time of his marriage on 04 Sep 1892 (5).

Cochran's pop factory started in Baraga on 09 May 1896 (11). It was noted in Jul 1896 that the firm of J. A. Cochran & Co. were "manufacturers of carbonated beverages" and were "doing a good business" (1). The partnership consisted of John A. Cochran and Adolph A. Pinet, but it dissolved on 02 Jun 1900 (2) with Cochran purchasing Pinet's interest and becoming sole proprietor (1).

In addition to soda, Cochran apparently bottled local mineral water. When driving a pipe for a well 12 miles west of Baraga, M. Pelkey struck a vein of mineral water (6). It was said to possess medicinal qualities, and its sale was placed with Cochran in 1903 (6). Cochran had is left hand badly lacerated by the bursting of a pop bottle in May 1905, and the notice stated that his business was called the Baraga Bottling Works (12). In Sep 1906, Cochran installed new machinery, enabling his bottling works to be operated by water motor (7). It was stated that, "Mr. Cochran now has an up-to-date establishment and is enabled to cope with his large and constantly increasing trade." (7). The 1907 Michigan State Polk directory listed Cochran as village treasurer and manufacturer of ginger ale, pop, all kinds of carbonated beverages, and Cleveland Cider Co.'s apple cider (8).

In Jan 1908, he renovated his pop factory with a new wash tank and other new machinery (9). Shortly after, in May 1908, he announced that he would be moving to Houghton on or about Jun 1st (10). The plan was for him to manufacture in Houghton and retain the Baraga location as a distribution station (10). The intent of the move was to help him meet the rapidly increasing demand for his products in the wider Copper Country (10). His Houghton location was in the Karkeek building near the county bridge (10). The 1912 directory specified the address as 160 Lake (13), which is now called Lakeshore Dr. It also stated that he was "bottler of the famous Cochran's ginger ale and other carbonated beverages". It seems his ginger ale was his signature product. 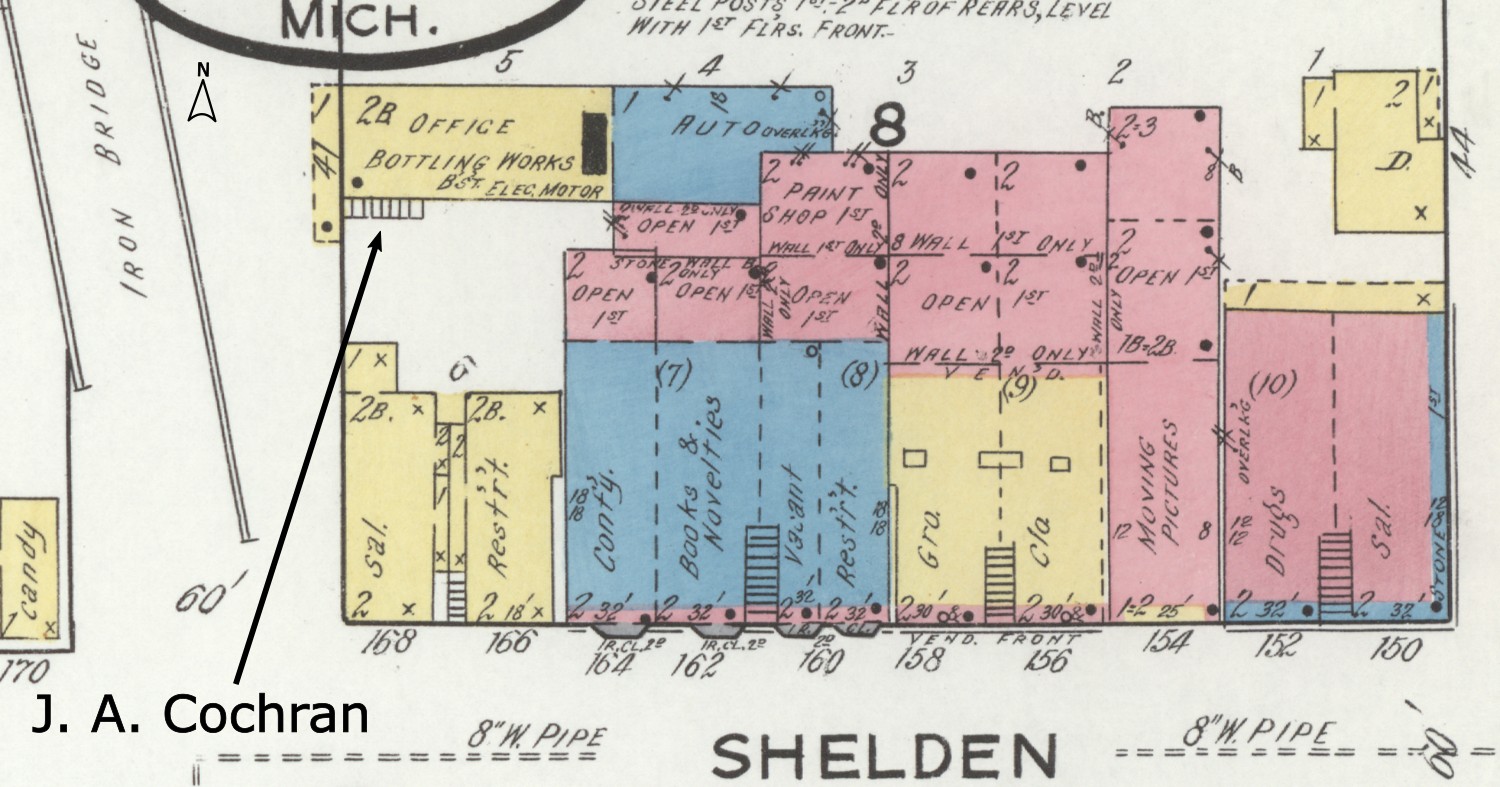 Charles Nikula was born in Finland on 13 Dec 1874 (24) and immigrated to the U.S. in 1892 (4) when he was 18 years old (22). He spent a short time in Oscoda, MI and then in the lumber camps of Louisiana (22). He moved to Negaunee and worked four years as a miner (22). He was in Negaunee as an iron ore miner for the 1900 U.S. Federal Census (25). He then became a bottler, sold the business after three years, and then operated a bottling works in Hurley, WI for six years (22). He was in Wisconsin as a pop factory owner for the 1910 census (4). In 1909, he purchased in bottling works in Ironwood, MI and later sold the business in 1921 (22). After inspecting various cities for their prospects of running a bottling business, Nikula move to Houghton and in Mar 1922 purchased the Houghton Bottling Works from J. A. Cochran (22,11).

The 1930 directory listed Charles Nikula as proprietor of Houghton Bottling Works (14). There is some suggestion that Nikula inherited this bottling works name from Cochran (22,23), however we have not found any documentation that Cochran used it. Nikula was still listed in the 1939 directory at the same location (26). Nikula then died on 14 Jul 1939 and was buried in Forest Hill Cemetery, Houghton (24). The last known ABM bottle has a date code for 1942, suggesting that someone took over the company, but then the business was not listed in a 1947/1948 business directory (27).

We can only wonder how good was Cochran's ginger ale. At least we still have his bottles to cherish.