Nick Miettunen had only three bottles in different sizes with the same embossing design, suggesting they were ordered as a set during a short period of time. The embossing does not specify a town name, so one may wonder if they are actually Copper Country bottles. They are. His presence in the Copper Country is confirmed by the Polk directories, which listed his bottling works in Laurium (2,3). Plus, his bottles were found locally.

According to his family tree on ancestry.com, Nick Miettunen was born Niklas Jaakonpoika Miettunen on 13 Dec 1862 in Finland. He immigrated to the U.S. in 1887 (1). It is unknown where he settled first or when he arrived in the Copper Country. Most of the 1890 U.S. Federal Census was destroyed by fire and we could not find Nick listed in the 1900 U.S. Federal Census. 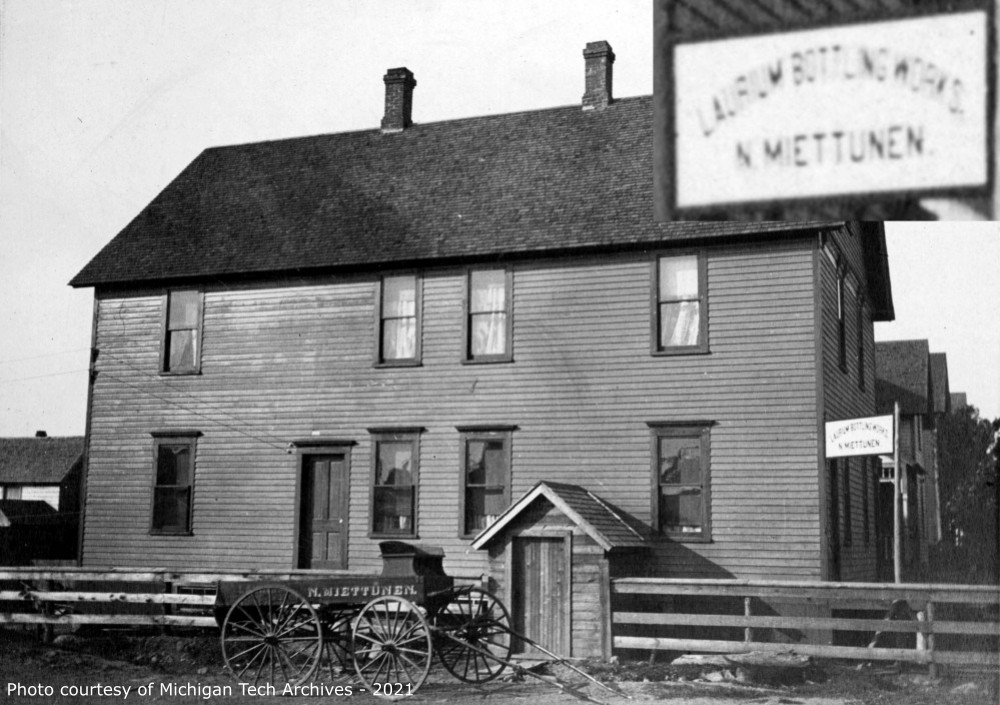 Among his bottles, the mid-size one is the only Hutchinson bottle of this size from the Copper Country. It does not have a maker's mark, but his pint-size bottle was made by Illinois Glass Co. The 1906 Illinois Glass Co. catalog does feature a few 10 or 12 oz. Hutchinson molds. It is intriguing why Nick ordered a non-standard size.

From Laurium, Nick moved to Minnesota where he continued to bottle for a period of time before switching to other occupations. Like the Copper Country, northern Minnesota was an area where many Finnish immigrants settled (13). He was listed in the 1905 Census of Minnesota as a resident of Chisholm with the occupation of pop manufacturer (4). The History Museum of East Otter Tail County listed him as starting his business in soft drinks in Chisholm in 1906 (5). The Minnesota HutchBook lists a bottle embossed, CHISHOLM BOTTLING WORKS / NICK MIETTUNEN, made by A B Co with a date code for 1911 (6). The Polk directory of 1910 placed him in Chisholm as a bottler with his business and residence being the same address (7).

Curiously, Nick also had bottles bearing his name from Aurora, MN (6), which is 43 miles from Chisholm. They are embossed AURORA BOTTLING WKS / AURORA, MINN. / NICK MIETTUNEN and NICK MIETTUNEN BOTTLING WORKS (6). One of the Aurora bottles has a date code for 1908 (6). We haven't found any record showing that Nick resided in Aurora, and it seems he operated both locations simultaneously. After his bottling career, he was listed in Chisholm for a saloon in 1912 (10), as a woodworker in 1915 (8), and no occupation specified in 1917 (11). In 1920, he was in Virginia, MN with no occupation specified (1). In 1930, he resided on a county road in St. Louis County with occupation as a road worker (9). He (listed as Nikolai "Nick" Miettunen) died on 23 Nov 1930 in Chisholm (12). Him and his wife, Elizabeth Miettunen had no children.

Nick Miettunen Bottling Works may have been a short-lived business, but it connects to the Finnish immigrants that settled in the Copper Country. Today, Finnish heritage is still a large part of the local culture. There are still unanswered questions about Nick Miettunen, including when did he arrive in the Copper Country, why did he leave so quickly, and did he take any of the bottles with him to Minnesota.