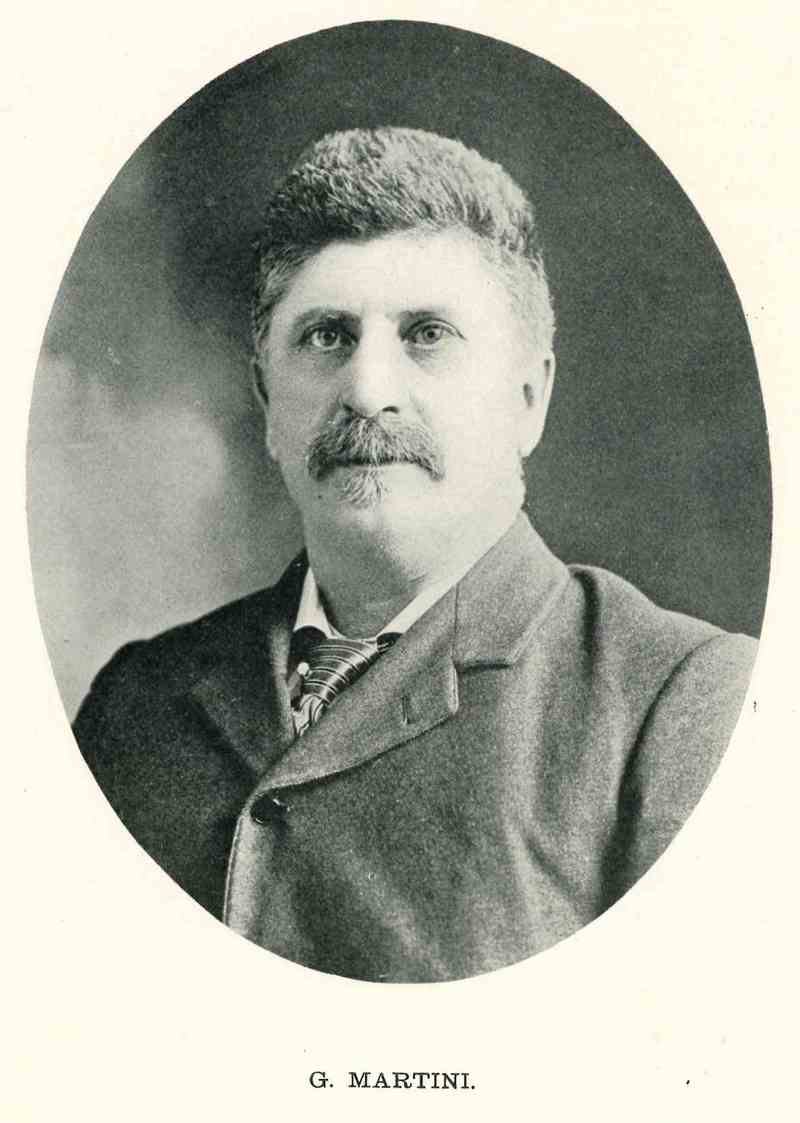 Antique collectors know G. Martini for his extensive array of ceramic whiskey jugs (21). Fortunately for bottle collectors, he also had one embossed whiskey flask. He was a prominent businessman in the Copper Country.

Guerrino Martini was born on 22 Nov 1850 in Italy (1). He immigrated to the diamond fields in South Africa, but was not able to find success (22). He then immigrated to the U.S. in 1875 (1). He spent time in New York, New England, and then Chicago (1), where a friend fitted him with a scissor grinder (22). He walked from Chicago to Houghton carrying the scissor grinder on his back (1,22). He worked at the Hecla Mine for five years, serving as foreman for three years (1). He was given the nickname "Big Mike" after a clerk misspelled his name as "Mike Murphy" (1). He then engaged in the confectionery and fruit business in Calumet (1). The Polk directory listed him as a confectioner in 1883 (6), grocer in 1891 (7), and for "fancy groceries and a little of everything" in 1897 (8).

In late 1897, he had plans to sell his stock, retire, and leave the Copper Country (2). He did put his stock up for sale at cost (3), but he took at business trip to New York and Chicago and purchased a new stock (4). He announced that he would open on 01 May 1898 a wholesale liquor business (5). He remodeled his store with a steel ceiling, new display cases, fixtures of rich hardwood, and a partitioned section for wholesale cigar and tobacco sales (5). Within five months, he had a thriving business as a result of purchasing stock directly from manufacturers and saving his customers the expense of middlemen (23). 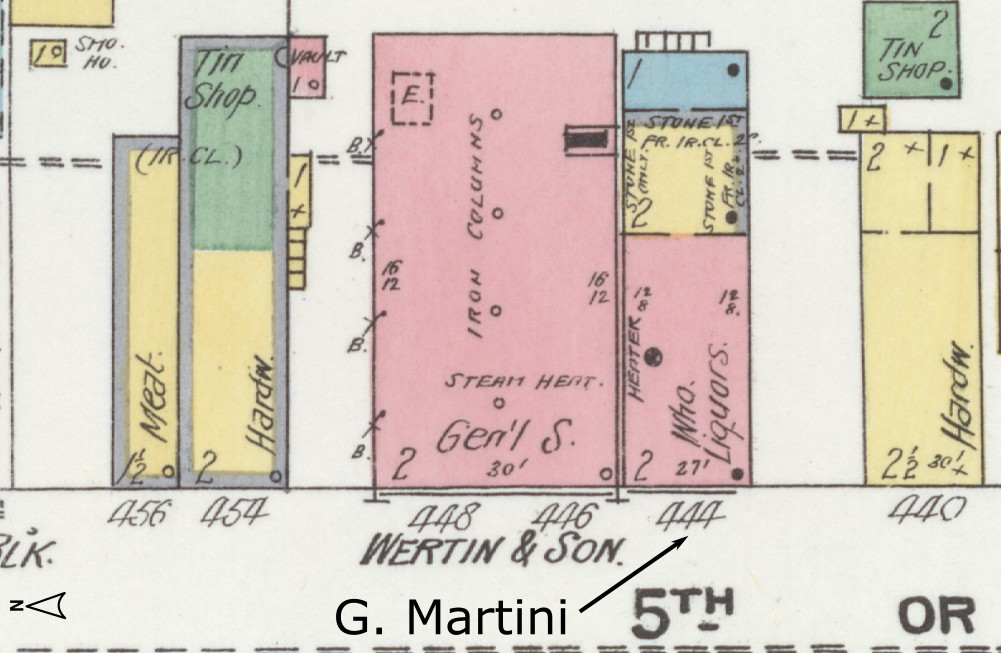 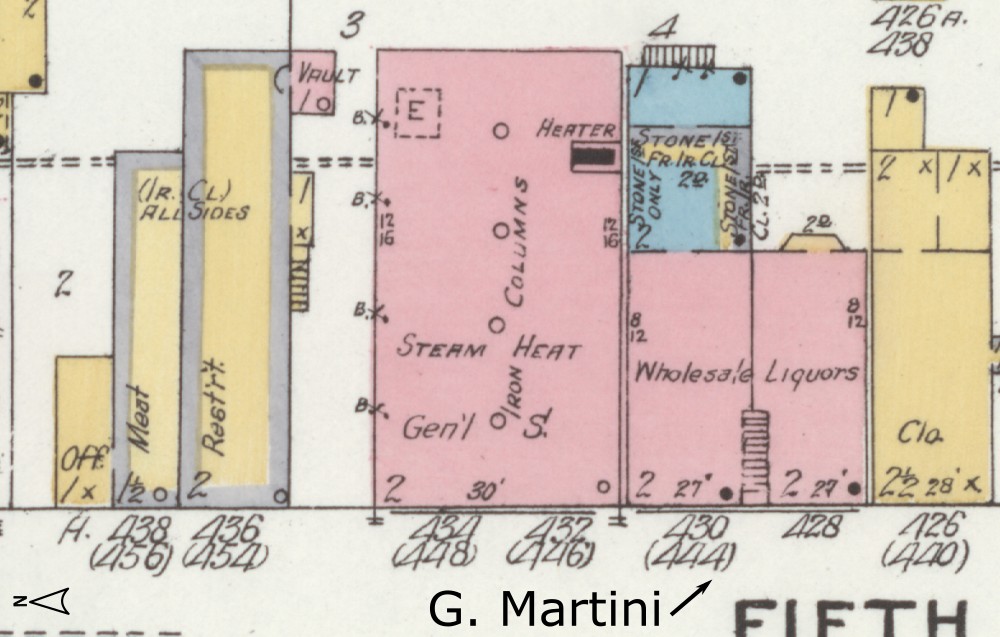 Since the bottle specifies G. Martini (although misspelled) and not G. Martini & Co., and has 444 5th St. as the address, it dates to 1898-1906. As a wholesale liquor dealer, he probably purchased whiskey by the barrel and distributed it into jugs and bottles. Most whiskey flasks were unembossed, so it was fortunate that Martini used an embossed one. 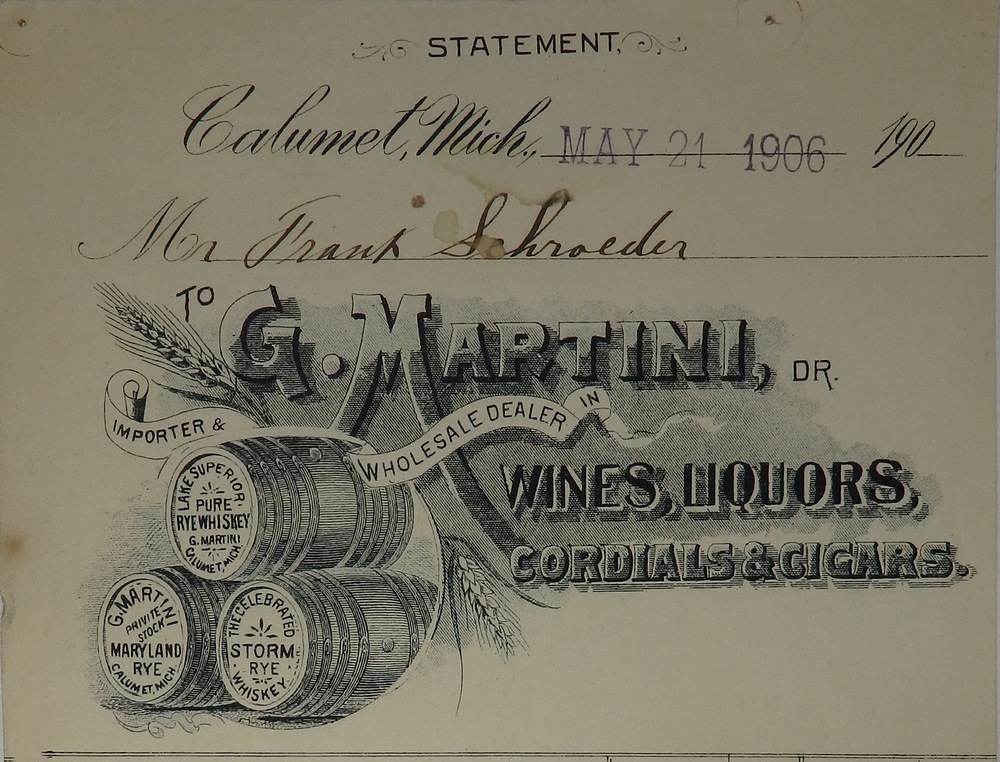