With only a pair of initials, the S. & S. bottle provides little information for identifying its bottling works and proprietors. Based on the bottle being a squat soda with the A & D H C maker's mark, we focused our search to the 1860s - 1870s. We do not have access to the 1865 and 1869 volumes of the Michigan State directory, so it was fortunate that the 1867 volume had a listing for Shelden & Sheffer (1). Curiously, it listed them in Houghton as druggist and in Hancock under Soda and Mineral Water Manufacturers. The listing, however, did not provide first names nor a business address.

Shelden & Sheffer opened their drug store on the corner of Shelden Ave. and Isle Royale St. in Oct 1864, with Sheffer being in charge of the prescription department (18). One side was devoted to medicines, while the other side was occupied by groceries (19). In Jul 1866, they set up a soda manufacturing operation with a capacity of 300 dozen bottles per day (20). Business was seemingly good, since from Jul 01 to Nov 01 in 1866, Shelden & Sheffer sold 10,336 dozen bottles of soda (21).

In Jun 1867, they consolidated their pop factory with Smith's pop factory to form City Bottling Works with Geo. C. Shelden as proprietor (22). An ad for Corner Drug Store stated that A. C. Sheffer purchased the interest of G. C. Shelden in the firm Shelden & Sheffer, and "...will conduct the business as before at the old stand...", indicating that Sheffer kept the store. An ad for City Bottling Works stated that George C. Shelden was proprietor and the business was located at the corner of Shelden St. and Isle Royale St., the same location as for the Shelden & Sheffer drug store. Thus, it seems neither of them moved from their original drug store location, unless Shelden moved to another corner on the same intersection.

We could not find census records for an A. C. Sheffer residing in Houghton, but we found a marriage record for Ambrose C. Sheffer who was a druggist (7). He was born in Bohemia, Germany and was married on 30 Dec 1868 in Houghton to Lizzie McKenzie (7). The last reference to his drug store that we found occurred in Jul 1869 (24). A. C. Sheffer was then listed in the 1871 Detroit City directory as a druggist (7), signifying that he had left the Copper Country. It is unknown what happened to him thereafter.

As for the store, it seems Graham Pope, who advertised his drug store from 26 Aug 1869, took it over. Pope sold his store to Hebert & Deschamps in Feb 1872 (26). The 1873 directory described the location of Hebert & Deschamps as being on the corner of Shelden Ave. and Isle Royale St. (27), the same description as for Shelden & Sheffer's store. Hebert & Deschamps then moved their store to two doors east of Isle Royale block in Dec 1876 (28,29). 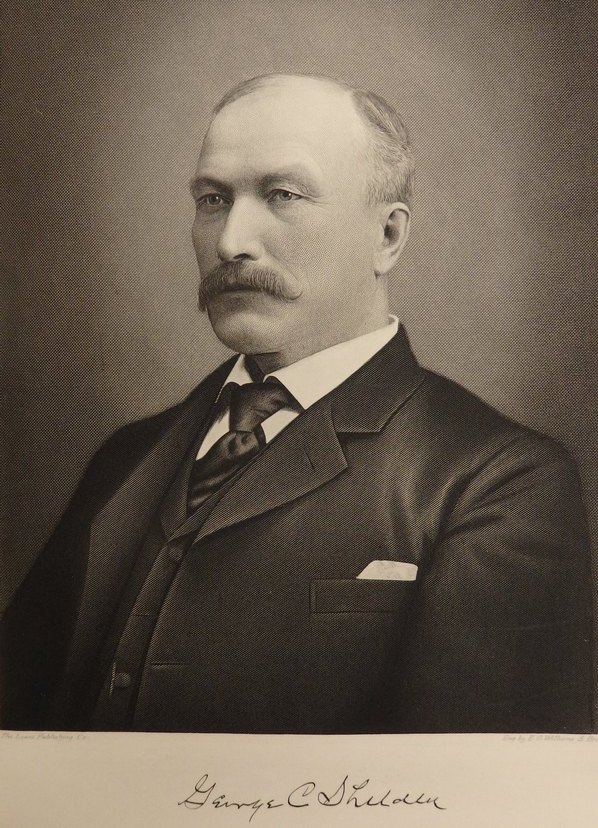 George C. Shelden was the son of the Copper Country pioneer, Ransom Shelden, who was born in New York (2). George was born on 27 Dec 1842 in Walworth County, WI (2). He was raised and educated in Ontonagon County, and then served in the Civil War as first lieutenant and then captain until the end of the war (2). When he returned to Michigan, he engaged in the mercantile business with different partnerships and invested extensively in real estate (2). He purchased Peter Sauer's brewery in Hancock (3), but it burned in the great fire (4) of Apr 1869 (6) and then was destroyed by fire in Dec 1869 (3,4). He sold the City Bottling Works to S. & J. Lloyd in Nov 1869 (23). He then moved to Negaunee to start another brewery (3). The 1870 U.S. Federal Census placed him in Negaunee as a brewer (5), documenting his move.

Shelden returned to Houghton in 1875 (3) and continued to be a prominent member of local business. He promoted building the Portage Lake bridge and acted as secretary and treasurer of the Portage Lake Bridge Company (3). The bridge was sold to the county in Aug 1891 for $35,000 and became toll-free (13,14). Shelden, in partnership with his brother, Ransom B. Shelden and Adolph J. Ruhl as prescription clerk, formed Shelden Bros & Co. and started a new drug store, the City Drug Store, in Houghton (16) and opened in Sep 1889 (25). They purchased the entire stock, counters, and fixtures of Dr. G. W. Orr's drug store in Lake Linden (16). They, along with their older brother, Carlos D. Shelden, organized a medicine company, the Antialgia Chemical Co., which had its office in the drug store (15). The firm dissolved on 01 Nov 1890 and Ransom B. Shelden continued the store (17).

Shelden's life came to a tragic end. He was shot four times on main street in Houghton and died later that night (3). His assailant, an employee who was being tried for severely beating Shelden after a work dispute, jumped off the bridge (3,11) and his body was recovered five days later (9). Shelden died on 30 Sep 1896 at the age of 52 (10) and was buried in Forest Hill Cemetery, Houghton (12). An article in The L'Anse Sentinel marking his funeral stated (9):

The loss of Geo. C. Shelden to the town of which he has long been a prominent and patriotic citizen will be long felt in many a home which has been a recipient of his quiet generosity and charity. His great love of Houghton was doubtless attributable to the fact that his father was its founder, and its pioneer industries were all connected with the name of Ransom Shelden. There was no enterprise calculated to redound to the financial or social interests of his native village that did not receive the liberal support of George C. Shelden. His loss is a sad blow to Houghton, and his place in the community will be hard to fill.

Based on the history we uncovered, the S. & S. bottle dates to 1866-1867. The directory listing for Hancock still remains a mystery, but Sheffer had a bottle from Hancock that bears his name (see A. C. Sheffer). The City Bottling Works continued under J. Lloyd & Bro. (see J.L & B).