R. T. Harvey's bottling works was not only the longest running pop company in the Copper Country, but it was also the last pop company in Michigan to operate under its own name as opposed to a franchised brand (1). It was a family operation for most of its existence (1).

Richard Thomas Harvey was born on 06 Sep 1845 (2) in Cornwall, England (3), and immigrated to the U.S. in 1862 (3) or 1865 (4). It is unknown where he settled first, but he resided at the Delaware Mine in 1877 and worked as a miner at the time of his marriage (3). In 1888, the family moved to Eagle Harbor (24). In Jul 1898, he bought Arvid Kemp's pop business in Red Jacket (27). The plan was for his son, George to conduct the business, and if proved successful, he would move to Red Jacket with his family (27). Another article referenced his oldest son as the one to conduct the business (28), and that would have been Richard H. Harvey (4). The business apparently was successful, as he promptly moved the family to Red Jacket.

Richard T. Harvey was first listed as a bottler (with his son, Richard H. Harvey as pop maker) in the 1899 Polk directory, with the business and residence at 426 Pine St., Calumet (8). The Sanborn map shows this address on the south side of the street, just west of 4th St. As expected, this was the former location of Kemp & Roberts and Isaac Lantto (7). The 1900 Sanborn map shows that he moved the bottling works to the front building, as previously it was located in the rear building on the lot. By the 1901 directory, he had moved his business and residence to Florida St., Laurium, southwest of Lake Linden Ave. (9). He was now listed as proprietor of Calumet Bottling Works (9), although the bottles indicate that he used this company name from the beginning. 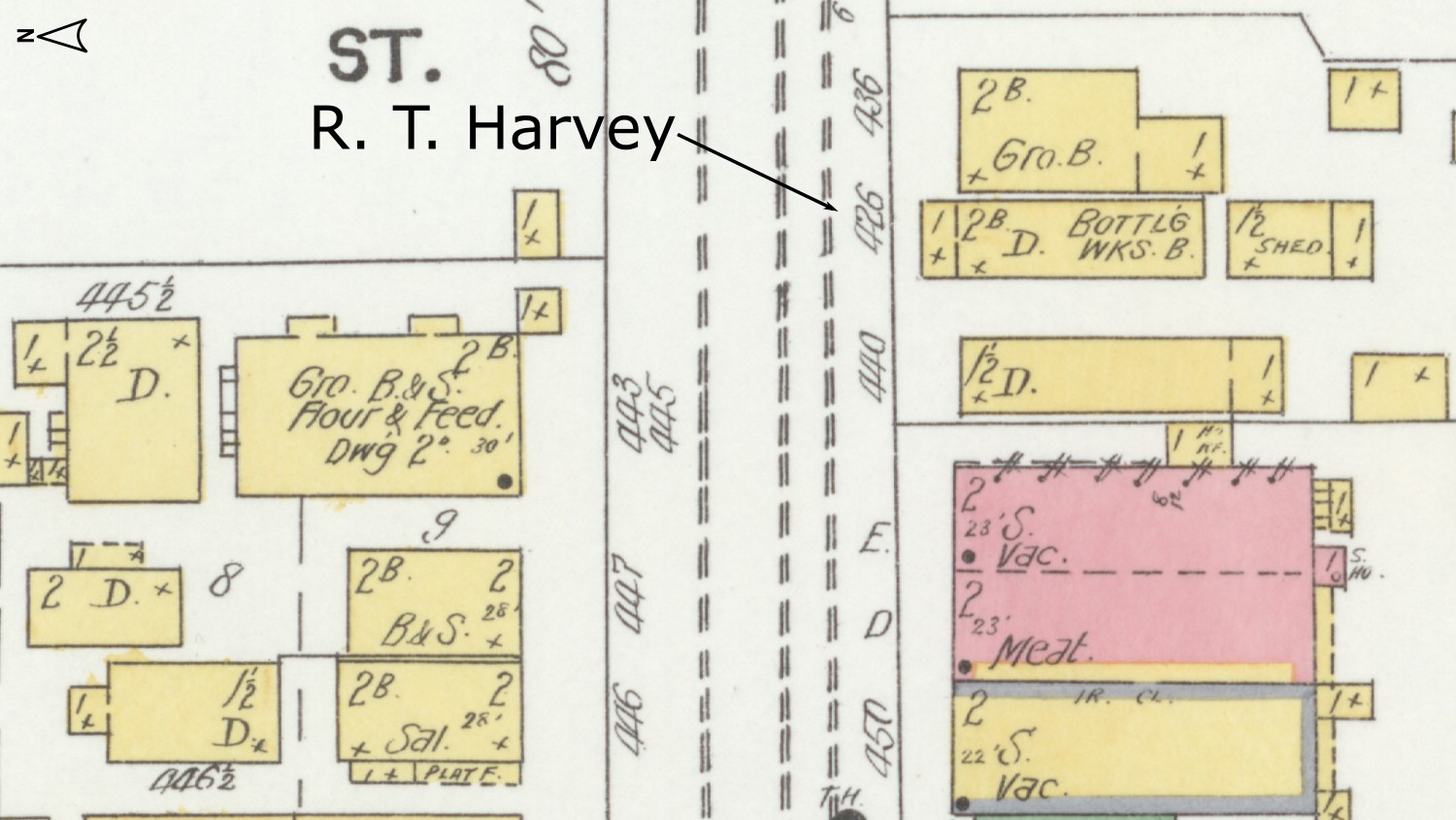 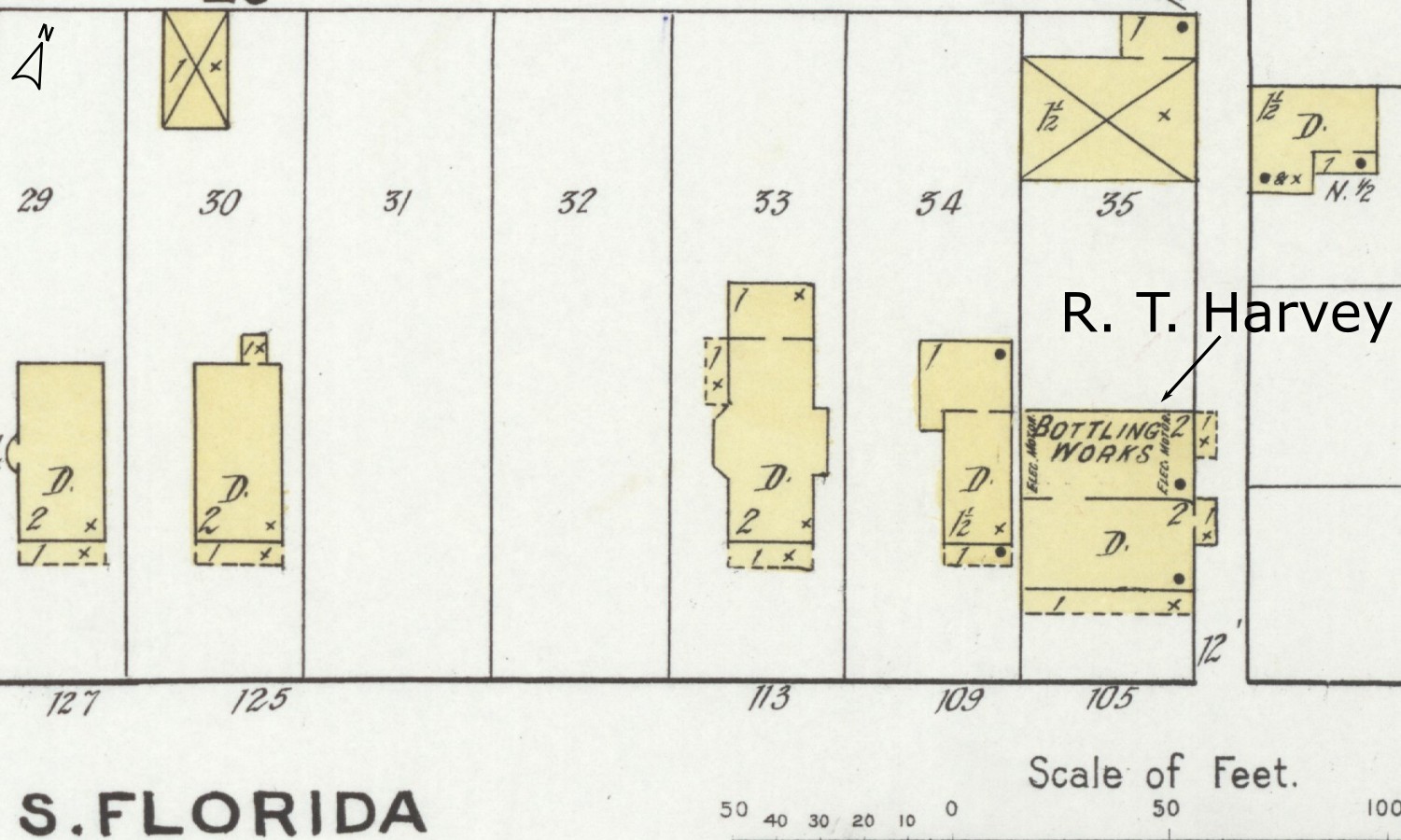 In Apr 1908, the Harveys made improvements to the factory (25). They installed a new automatic carbonator and a new bottle washer. The water used in manufacturing pop was filtered through a Noxall stone filter and stated to be "absolutely pure". The mixing room for mixing syrups before carbonation was said to be "a model of neatness" and "bespeaks excellent sanitary conditions". The interior of the building was being redecorated in anticipation of a greater summer season than any previous season in its history. Harvey produced the following sodas in 1910: Sarsaparilla, Lemon Soda, Solo Ginger Ale, Imitation Strawberry, and Harvey Brew (13). The company had six employees in 1910 (14), seven in 1912 (15), and five in 1914 (16).

My Grandfather would deliver pop to the Keweenaw via the Keweenaw Central Railroad before 1919. He would load the soda onto box cars in Red Jacket and drop it off at Ojibway, Seneca, Vansville, Phoenix, the Casino, the junction for Central, Delaware, Wyoming or Helltown, and Mandan. A team would meet the train at Wyoming and take it on to Copper Harbor. There would be another team waiting at the junction to take the sarsaparilla pop to the Brown Cafe in Wyoming. (Wyoming is near the junction of the Lac La Belle Rd. and US 41) They named it "Helltown" because of all of the bar fights there. The cafe was owned by Charles Brown and Grandfather would wait at the cafe for the train to turn around at Mandan. Each trip to the Keweenaw took about three hours.

A newspaper article from the time of its closing explained its former operations (1). The bottling works had storage in the basement, the bottling shop on the second floor, family residence on the third floor, and bottling supplies in the attic. Harvey's pop was famous in the local area and was not distributed further south than Dollar Bay because the Keweenaw residence consumed all that was produced. In later years, Harvey produced gingerale, iron brew, lemon soda, orange, grape, cherry, strawberry, rock and rye, raspberry, and root beer. One of the best sellers was lemon soda, which was used for medicinal purposes and shipped to Mayo Clinic and as far as Arizona.

When someone sees the embossing of CALUMET BOTTLING WORKS, they may naturally think the bottling works was located in Calumet. Even the bottles embossed with HARVEY BOTTLING WORKS state the location as CALUMET, MICH. In actuality, the bottling works was in Calumet for only the first 1-2 years, and then spent the rest of his existence in Laurium. Only the siphons state "Laurium" as the correct location. This confusion may result from Laurium originally being the village of Calumet and Calumet originally being the village of Red Jacket (26). The town name of Laurium was established in 1895 (26), and we first see it used in the 1895 Houghton County Polk directory (12).

With such a long-lasting, successful operation, we can see why Harvey had so many different bottles. Yet, the ones featured here are only the hand-blown bottles, and thus represent only a portion of the Harvey collection.