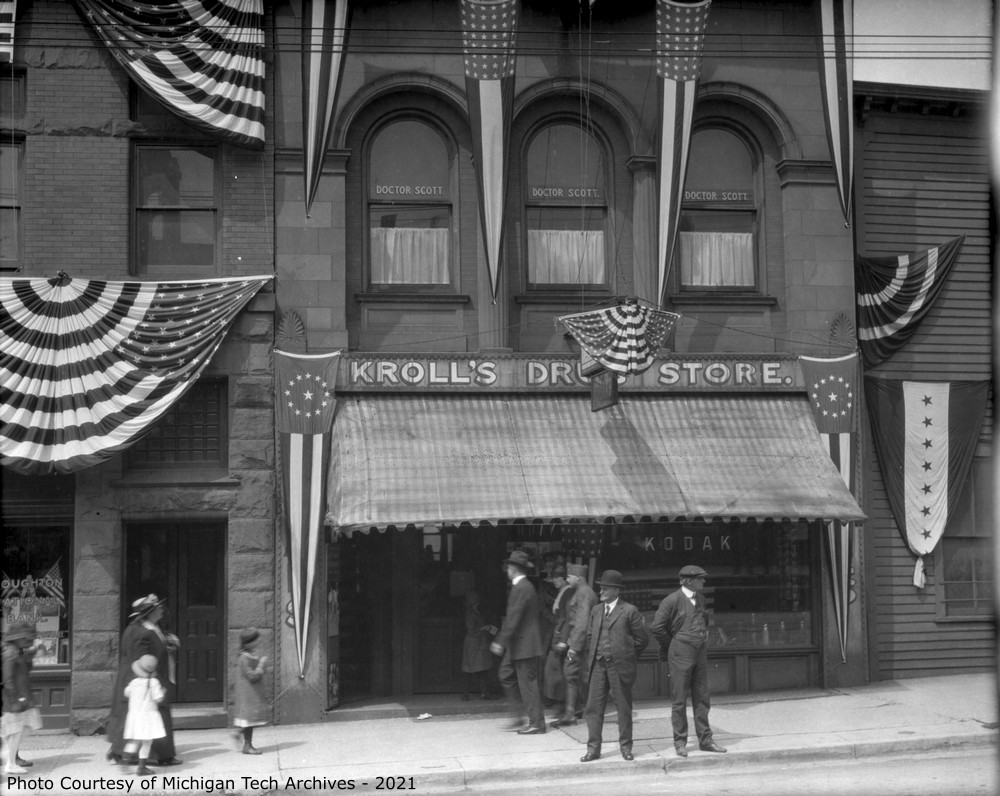 Despite a long career as a druggist in Houghton, Fred W. Kroll is known to have only one bottle in one size that bears his name. Like most pharmacists, he evidently used mostly unembossed bottles.

Fred W. Kroll was born in Houghton on 30 Sept 1857 (1) to immigrants from Germany (2). Before becoming a druggist, he received a common school education, worked as a clerk in the Houghton post office for eight years, and then formed the firm of Fred W. Kroll & Co. in Sept 1879 with Frank A. Douglass as a partner (1). They appear to have been general merchants since they were dealers in books, stationery, notions, sporting goods, fancy goods, toys, confectionery, cigars, tobacco, etc. (1,3). The firm dissolved on 01 May 1888 with Kroll maintaining the business (13).

In Summer 1889, Kroll added improvements to his store, including new shelving and counters in the rear space formerly occupied by Douglass with plans to open a drug store in that space (17,18). He was listed alone in the 1889 directory (16), and added a soda fountain by May 1890 (19). In May 1890, the newspaper announced that he had purchased the prescription case from the post office news and drug store in Lake Linden in preparation to opening his drug store in Houghton (20). He opened the drug department in the west side of his store in May 1890, under the charge of M. A. Yonmans from Detroit, a registered pharmacist, while the east side of the store was devoted to Kroll's book and stationery business (21). At least from Sep 1890, the store was called the Star Drug Store (22,23). The 1891 directory listed Frederick W. Kroll as a druggist in Houghton, but also listed Kroll Brothers consisting of Frank and Frederick for groceries, provisions, flour, feed, etc. (14). The grocery store with his brother did not last long, since in Dec 1890, the grocery stock was being sold cheap (24), and then in Jan 1891, the store room was offered for rent by F. W. Kroll (25). The 1895 directory listed Fred W. Kroll as a dealer in drugs, sporting goods, and stationery (4).

The 1895 directory specified the location of the store as being on the north side of Shelden Ave., third unit east of Isle Royale St. (4). The 1893 Sanborn map marked this location as 224 Shelden Ave. and labeled the building "Drugs". In Apr 1899, fire damaged the building to the extent that it was hardly worth the expense to repair it, so Kroll decided to replace it (26). In May 1899, Kroll solicited bids to take down his old store, which needed to be removed by Jun 1st (15). The plan was to erect a two-story building with a sandstone front, offices on the second floor, and the drug store on the first floor (27). In Nov 1899, Kroll moved his stock from temporary quarters to his new building (28). The 1900 and 1908 Sanborn maps show a brick building where a frame building once stood. The 1905 directory subsequently listed Frederick W. Kroll as proprietor of Kroll's Drug Store at 64 Shelden Ave. (5). The 1908 Sanborn map shows that this change in address was due to re-numbering of the street.

The one Kroll bottle has an Eastlake Oval shape with D. F. & CO. within a sunburst as a maker's mark. This is the mark of Dean, Foster & Co., and it dates to c.1894-c.1911 (9). Given the long history of Kroll's drug store, we are not able to further narrow down this date range.