Holland's Houghton directory for 1887-8 stated that Dr. John P. Mason was "a pharmacist of high standing" and "the drug store of Dr. Mason is the leading one in Houghton" (1). Mason was a resident of Houghton County from 1878, and was listed as a "physician and surgeon", and "pharmaceutist and dealer in druggist's sundries" (1).

John Park Mason was born in Elmira, NY on 27 May 1854 (7). John's father died when John was an infant, so John was raised by a widowed mother (2). He learned the trade of a machinist, which taught him the mechanical skills that contributed to his later success as a surgeon (2). He attended Cornell University for two years and then completed his first year at Buffalo Medical College (2). He then moved to the Copper Country and practiced for a year as assistant to Dr. Plews, the physician for the Quincy Mine (2,12). He then returned to Buffalo Medical College, completed his second year, and graduated as a physician and surgeon in 1880 (2). He promptly returned to the Copper Country and practiced as the resident physician of the Pewabic Mine for five years (2,12).

Mason then entered private practice in Houghton (2) and purchased Dr. Hafenreffer's drug store from Dr. Maclean in Aug 1884 (8). The 1887 Holland directory placed the store at 410 Shelden Ave (1); however, the 1888 Sanborn map shows this address to be a dwelling east of Ripley St. The newspaper announced in Aug 1888 that Mason enlarged his drug store by removing the partition separating his doctor's office from the store, and his doctor's office was probably moving to the room above Josiah Paull's hardware store (13). 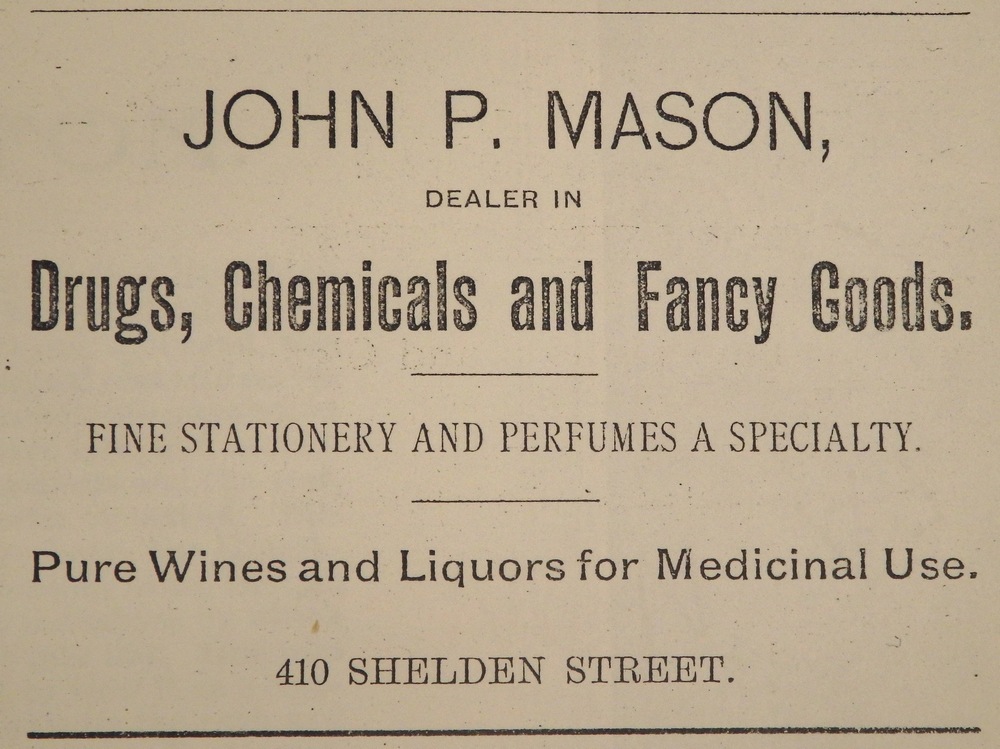 In May 1890, Mason moved into the large store room recently vacated by Josiah Paull, who ran a hardware store (9). Mason then had plans to move into the Miller block in May 1891 (10). In Oct or Nov 1891, Mason moved his store into the newly-constructed Douglass-Mason block (11). The 1895 Polk directory placed the store in the Douglass-Mason block (3), and the 1897 directory described the location as on the north side of Shelden Ave., five units east of Isle Royale St., with his residence being the same (4). We find this location labeled as a drug store on the 1893 Sanborn map.

In 1894, John suffered a serious fall, which produced a permanent injury and forced his retirement from practice (2). The 1895 and 1897 directories still listed him for "drugs" (3,4), but then in Apr 1899, he sold the store to Edward DesRochers (14). DesRochers was a pharmacist and clerk alongside Mason from the beginning (5), and managed the business for years prior to becoming proprietor (14). In 1907, John and his mother returned to Elmira, NY (2). He later suffered an illness with carbuncles for several weeks (2) and died on 4 Jul 1910 at the age of 56 (7). Mason was unmarried (1).

Mason's pharmacy operated for about 12 years. It was not listed in the bottle book, Old Copper Country Bottles, but now three bottles are known, including the only colored pharmacy bottle from the Copper Country. Bottle #s29 is the only Copper Country pharmacy bottle to have the monograph square shape, which was more commonly used after 1900 (6), but based on the history, it probably dates to the late 1890s.