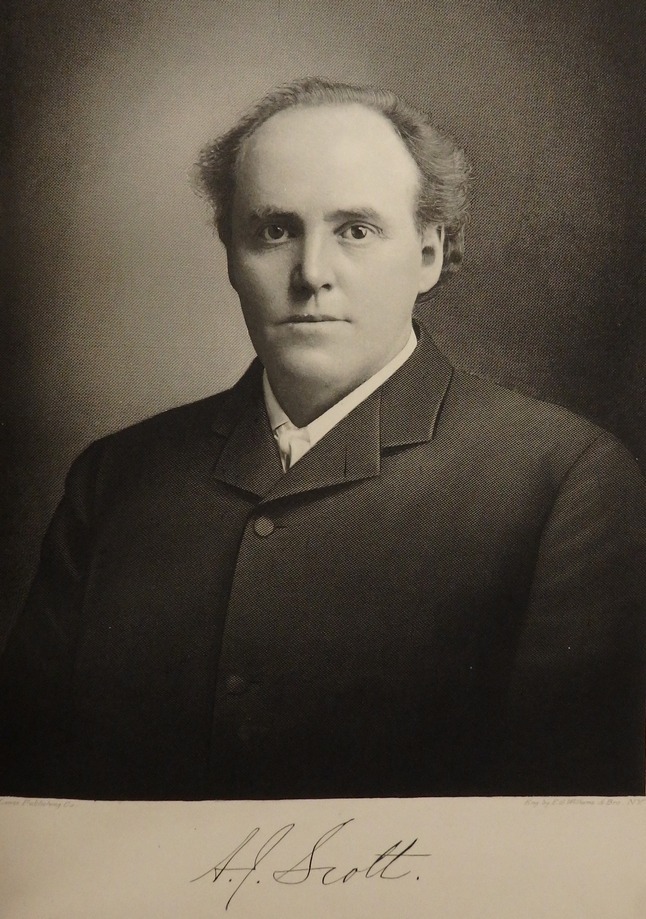 A. J. Scott not only ran a drug store in Hancock, but he was also a prominent member of Hancock's early history. Bottles associated with the drug store were discovered after the publication of Old Copper Country Bottles in 1978, which is a testament to their rarity. They bear the names, A. J. Scott and Scott's Drug Store.

Archibald James Scott was born on 24 Jan 1848 in Ontario, Canada (2), and is of Scottish descent (19). He lost his parents as an infant (3,4), and immigrated to the U.S. in infancy (16) to be raised by his uncle who's work as a railroad contractor moved them to several states (4). He then attended school in Wisconsin (4). In 1863, at the age of 15, he enlisted and served as an orderly in the Civil War as part of the 52th Wisconsin Volunteer Infantry until Jan 1865 (4). He moved to Houghton County in early 1866 and worked at a saw mill (3), and then in 1867 (4), he worked as a clerk in M. J. McGurrin's drug store (3), which opened in Aug or Sep of 1865 (14). He worked at the store until the Apr 1869 fire destroyed the city including the store (3,4). The fire started in a French saloon when a stove apparently was overturned at the end of an all-night dance (15). Instead of extinguishing the flames, the party left and the fire quickly engulfed the building and spread (15). Every store in town was lost among 150 buildings destroyed within a scorched 12-acre area (15).

Shortly after the fire, in 1869, Scott opened his own drug store in Hancock near to where the First National Bank was later located (3,4). The business directories listed only Scott's name and specified that he was a druggist, so it is unknown if he had a name for his drug store. In Jun 1873, Scott was building a new store (18).

Scott served as more than just a druggist for Hancock. He was the village assessor for four years, and then the village supervisor for 26 years (3,4). He served as fire chief of Hancock from the formation of the fire department in 1870 (3). He was superintendent of the City Water Works and installed the first pumping station in 1890 (3). He served a president of the village of Hancock, and was elected as the first mayor of the city, serving for 14 years (3). He was vice president of the First National Bank, a directorate of the Superior Trust Co., president of the Eva Mining Co., and a director of the Hancock Loan, Mortgage and Insurance Co. (3). He built the Hotel Scott, Scott Block in 1880, several other buildings, and 20 or more dwellings (3).

The 1873 directory located the store on Tezcuco St. (7). The store apparently moved because the 1887 Holland directory specified the address as 210 Quincy St. (8). Re-numbering of the street was not reflected on the Sanborn maps until the 1907 version, which showed the previous number was 441 Quincy St. We find that this location housed the drug store in the Scott Block on the south side of Quincy St, between Ravine St. and Tezcuco St. 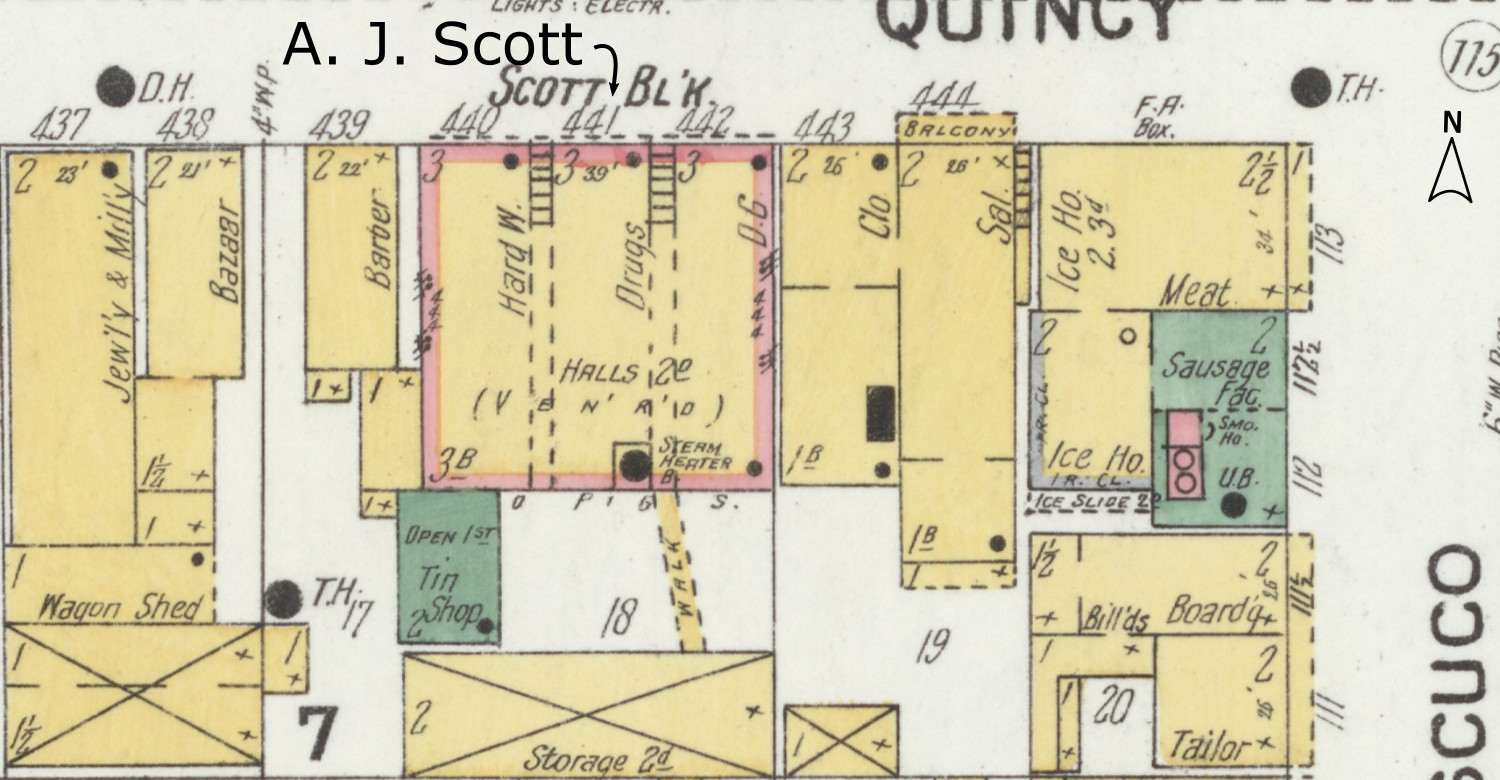 Scott sold the store (3), apparently to Peter O. Bakke, since Bakke was listed in the 1905 directory as proprietor of Scott's Drug Store at the 210 Quincy St. address (1). Bakke's time running the Scott's Drug Store was short-lived, however, as the 1907 directory noted that he had moved to Minneapolis, MN (11). The drug store evidently ended with Bakke since it was labeled as a clothing store on the 1907 Sanborn map.

One bottle and shards of another bottle bear the name, "A. J. Scott" and thus, can be attributed to Scott's time as proprietor. The bottle embossed with "Scott's Drug Store" can be attributed to Bakke, since only he was listed with this store name in the Polk directory. The Scott's Drug Store bottle is one of only two Copper Country bottles that bears the mark of Whitney Glass Works.